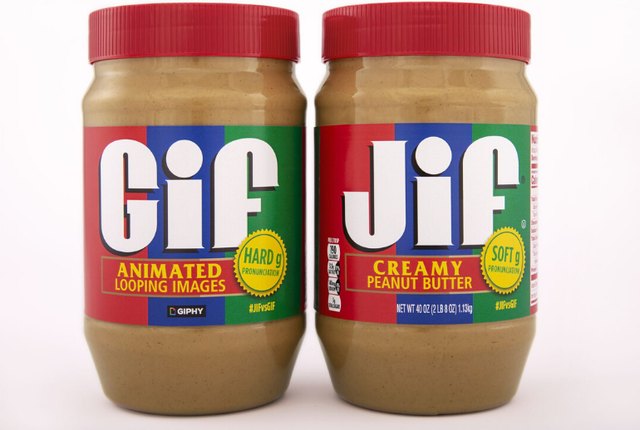 Jif needs everyone to know that there's only one Jif in town, but there's also a GIF.

Admit it, you have no idea how to say the word GIF. You're not alone. There has been almost a decade-long debate as to how it's pronounced, and still no one really knows—except Jif and GIF. They know, and they want the rest of us to know too.

The J.M. Smucker Company, maker of Jif, and Giphy, the popular animated looping image format, have teamed up to create a special edition jar of Jif peanut butter that replaces the classic Jif branding with the letters "Gif."

The purpose of the collaboration is to "settle the great debate" over how GIF is pronounced. Everyone knows that Jif is pronounced with a soft "g" sound, but GIF isn't as obvious. GIF stands for Graphics Interchange Format, and since the word "graphic" is pronounced with a hard "g," it only makes sense that GIF would be too.

While accepting a Webby award back in 2013, Giphy's creator Steve Wilhite pronounced GIF like Jif. And that's where the confusion lies, which is why Jif and GIF are settling the debate once and for all—they are pronounced the same way.

The jars are for sale on Amazon for $10 ahead of National Peanut Butter Lover's Day on March 1st. (Although it seems as though they are currently sold out.)

How to Insert a GIF Animation Into an Email

Around The Home
Productivity
By: Zach Lazzari

How to Insert GIF Animations Into Outlook Email

You'll Be Able to Stream Tonight's Democratic Debate on Hulu

How to Create an Animated GIF in Corel

Around The Home
Productivity
By: Darla Ferrara

How to Text a GIF