Memory, also known as RAM (Random Access Memory), provides a place for your PC to store information before writing / reading it to the hard drive. Its other use is to allow programs to run simultaneously without slowing your PC speed. Memory is also one of the cheapest ways to upgrade your computer's speed so if you ever need to find out what memory setup you have or how good another setup is, you should know the key memory characteristics and what they mean. 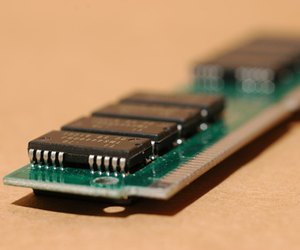 DDR, DDR2 and DDR3 stand for Double Data Rate. They are the measurement at which your memory transfers data chunks in a clock cycle. All memories work in clock cycles to synchronize their processes and a DDR unit transfers 2 data chunks per cycle. This means that a DDR memory will transfer twice as much data as an old memory unit would running the same length of clock cycle. Old memory units were SDRAM memories, which are not available for PCs anymore. The differences between DDR, DDR2 and DDR3 are their respective generations; the 3rd generation of DDR memory has a higher rate value than a DDR 1st generation.

The memory clock speed of computer memory is written in MHz. This is the value that determines how quickly the computer can transfer the memory on your PC. The total value that your memory can achieve is usually written after the DDR, DDR2 or DDR3 value. For example, DDR2-667 would represent 667 MHz. However, it is important to understand that the standard clock speed of the memory is always half of what is advertised; in this case, 333 MHz. This is because the DDR always runs at double the speed of what an old memory unit would have. Writing a DDR MHz value is the standard advertising values for memory chips.

Memory is measured in Megabytes, written as Mb. Standard practice for advertising memory units is to present it as a PC number with the Mb value written afterwards; for example PC6400. The MB value (6400) represents how much data is transferred per second and the higher the Mb value the more data that can be transferred. The Mb value is usually calculated by using the memory's clock frequency (MHz) and multiplying it by 8. This, however, is not always the exact number because manufacturers avoid selling memory with complicated numbers (e.g. 1066 MHZ x 8 = P8528) and instead round it up or down, in this case PC8500.

How to Use Infinity in Java

Around The Home
Productivity
By: Amber D. Walker

How to Calculate MIPS

Around The Home
Productivity
By: Athena Hessong

SODIMM Vs. UDIMM: What Is the Difference?