The speed of computer processing depends on the speed of the central processing unit (CPU) in your computer. While other factors are important, if you're interested in computer speed, the most relevant piece of information is the clock speed of the CPU. Clock speed is a big determinant of the number of instructions per second your computer can carry out, but bus speed, the specific type of instruction being carried out, the microprocessor and the amount of random access memory (RAM) available to your CPU also play a role. 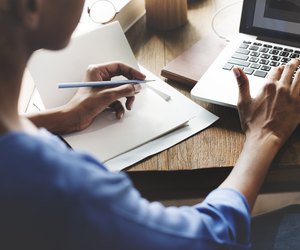 Speed of a Computer: CPU Speed

In 2018, the best processors have clock speeds exceeding 3.5 GHz. In comparison, in 1980, a typical computer ran at 4.77 MHz or more than 700 times slower than current CPU speeds. If you're looking at computer speed when you buy a computer, the processor speed or clock speed is one of the most important things to consider. Bigger numbers mean faster processing. However, most users don't push a CPU to its limits.

Just looking at CPU speed to determine computer speed is a limited an approach. Some processors have multiple cores, which are independent processors on the same CPU). The speed of the bus that transfers data between different parts of the computer, the size of the cache, which is quick-access memory within the computer, and the amount and speed of the RAM in the computer, another form of easy-access memory for the processor, all affect speed. Even with a fast processor, if you have a slow bus, a small cache and little or slow RAM, your computer won't function quickly. All of these factors are important.

For Macs, click on the Apple logo and select "About This Mac." Click "System Report" and look at the "Hardware Overview" screen. The "Processor Speed" and "Memory" fields contain the information you need.

How to Find Out What Processor You Have