Coaxial cabling is the means by which millions of people receive various services. From digital television to Internet to phone service, cable has become a major medium in the multibillion-dollar telecommunications industry. 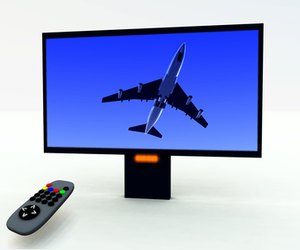 Digital television is one technology that often uses coaxial cable.

The grunt men who are responsible for connecting households to the world of entertainment and information are the cable technicians. They deal with coaxial cable daily and are trained to properly identify the different types at a glance. The do-it-yourself homeowner can easily implement this skill if she has an eye for detail.

All coaxial cable is made up of three major components. The first is the outer sheath normally made from thin PVC. Next is the white inner dialectric which acts as an insulator for any electrical energy. Lastly is the inner copper conductor sometimes referred to as the stinger. This is not in reference to the electricity, which is negligible and cannot do any harm. It refers to the way it looks when it's stripped away for a fitting.

Another component included in modern coaxial cable is shielding. This surrounds the dialectric preventing the emanation of energy from the cable and also acts as an outer conductor.

There are several types of coaxial cable, designated by the prefix RG. The original definition of the prefix stems from the military specification which meant "radio guide." Today it's a general term for coaxial cable.

RG-59 is the thinnest of the three. It was formerly used to carry video signals for cable systems and can be found as dual units that could be easily separated. This is for when cable channels had an A and B switch. The inner conductor is made of copper-planted steel. The dialectric is 3.7 mm in diameter. The outer conductor is a braided bare copper wire which covers 95 percent. The outer diameter is 6.15 mm.

RG-11 is used for when the cable tap is a very long distance from the residence. It is easily identifiable as it is a very thick cable (and hard to work with). The insulation diameter is 7.24 mm and the outside diameter is 10.3 mm. The inner components are generally made of the same material as the the RG-6.

How Do Coaxial Cables Work?

Around The Home
Entertainment
By: John Albers Around The Home
Entertainment
By: Jacob Workman

What Are the Different Types of Coax Cable?

Around The Home
Entertainment
By: Michael Gunderson

Around The Home
Entertainment
By: AlanFaeorin-Cruich