Whether for work or home use, an Excel spreadsheet is the best tool in Microsoft Office for organizing data and making lists. Although Word documents can include tables and columns, Excel makes laying out information far easier. Excel also has a range of functions for designing formulas that automate calculations. Although Excel looks intimidating at first, the program's layout is similar to other Office applications, so if you've used Word, you'll feel at home after a look around. To get extra help with a particular button on Excel's ribbon, hover your cursor over it to see a tip. 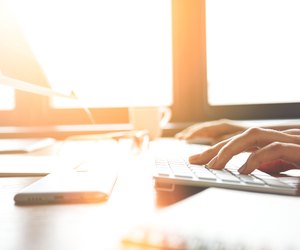 The main portion of Excel's window consists of a spreadsheet -- or worksheet -- of cells. Just as with a paper spreadsheet, each cell can contain any numbers or any text -- unlike working with an Access database, Excel allows you to simply click on any cell and fill it however best fits your project. In some cases, such as to track spending, you'll want to use an organized series of rows and columns. Other times, such as building a list of team members, cell order and positioning won't play a major role. One advantage to Excel is how simple it makes reorganizing data: select a cell and drag its border to move it to a new spot on the sheet.

Every Excel file, called a workbook, contains one or more worksheets. To switch between sheets in a workbook, use the tabs in the lower left corner of the window. Since Excel 2007, most workbooks use the file extension XLSX, whereas older versions used XLS files. New copies of Excel can read these old files, but to open a new workbook in an old edition, the old PC needs the Office compatibility pack.

As with the rest of Office since 2007, Microsoft has replaced Excel's menus with ribbon tabs. You can think of the tabs as visual menus that remain open -- each tab contains a set of related features with explanatory icons. For example, the Home tab contains the most common options, such as font and text color, while the Insert tab offers ways to insert tables, text boxes and charts. One tab, File, behaves differently. File still contains basic tasks including "New," "Open" and "Save," but displays these tasks in a full-screen area with extra options, called the backstage view. For example, the "New" button in the backstage view offers a searchable selection of templates for new workbooks.

In addition to containing plain text and numbers, cells can contain formulas, which always start with an equals sign. With a formula, Excel displays the result of an equation in a cell, but automatically keeps that result up-to-date as you change its components. A basic formula can take the place of a calculator: write "=2+4" and Excel displays "6." Formulas also work with data in other cells: "=A1+B1" adds the values of cells A1 and B1.

For procedures other than direct arithmetic, use functions to perform various operations on data. Functions' abilities range from simple math, such as "AVERAGE" to average a range of cells, to modifying text, such as "LOWER" to convert a line to lower case. The two terms are often confused, but remember that each cell can contain only one formula, but each formula can use multiple functions, such as "=AVERAGE(A1, B1)+SUM(A2, B2)" to add the sum of two cells to the average of two other cells.

What Are Some Practical Uses for Excel?

How to Restore the Default Settings in Excel

How to Sum a Column or Row of Excel Cells

How to Format Dates in Descending Order in Microsoft Excel

How to Align Text in Excel Cells