How to Fix Wavy Lines on a TV 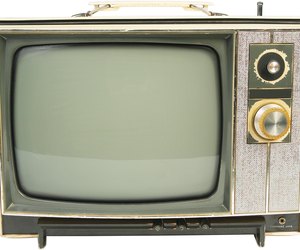 Anything that disturbs the proper display of your favorite television shows interrupts your leisure time and causes frustration. Wavy lines and other forms of visual distortion can come and go, making it hard to pinpoint the cause. Test the most common causes of this problem to restore your television's display capabilities.

When a lot of audio and video equipment is connected through cables and plugged into two different power outlets, a ground loop can form. This creates a circuit in which electricity has multiple grounds to choose from, causing electricity to move from device to device incorrectly. Wavy lines and other visual distortion patterns are the most common symptom on a television. Disconnect as many devices as possible that connect to the television and see if that restores the picture.

A television needs a steady supply of electricity to operate correctly, no matter the model or size. Wavy horizontal and vertical lines can form on the screen when a damaged plug or wall outlet disrupts the electrical flow. Overloading one circuit by plugging in dozens of devices in a single room is another cause of voltage problems. Unplug any other electrical equipment on the circuit that the television uses and plug it into a different outlet to determine if the original was damaged. The electrical cord may also need replacement.

Aerials and digital receivers are both susceptible to distortion of the broadcasting signal they use. If the wavy lines disappear when using a device like a DVD player but they appear during live broadcasts, signal distortion is at work. Simple devices like indoor aerial antennas create these lines when the signal they receive bounces off of nearby metal objects. Upgrading to a digital receiver helps. If the digital device continues to suffer from interference, shut off as many high-frequency devices like computers and wireless phones as possible that are near the television.

When you've isolated the television to a working power outlet and an area free of interference, the wavy lines should disappear. If the problem persists, call the cable or broadcast company and check that a system-wide signal problem is not the cause. If not, some part of the internal circuitry may be damaged, and professional repair or replacement may be necessary. If the problem returns on a replacement television, a signal or electrical problem is definitely the cause of the wavy lines.

How to Stop Digital TV Interference

How to Fix TV Static

How Do I Fix Cable TV Static?

Around The Home
Entertainment
By: Leon Williams

How to Ground a TV Cable Line