How Do Gramophones Work?

"Gramophone" is a term that can be used to refer to any record player (as can the term "phonograph"). In general, however, the term is used to refer to early record players that were driven by mechanical means and reproduced sound without electrical amplification. These record players are quite different from modern turntables, but the records that store the sound and the needles that turn it into audible music work in essentially the same way. 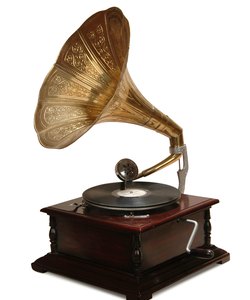 A gramophone (a phonograph) on a table.
credit: CEM AYDIN/iStock/Getty Images

Except for the early cylinder records invented by Thomas Edison, all records use a spiral groove to store sound. The earliest records had recordings on only one side, but soon companies started printing double-sided records which could store twice as much sound. The groove in the record looks straight and uniform, but it actually has small back-and-forth eddies which store the sound.

Like other record players, gramophones read the sound with a small needle which fits into the groove in the record. That needle is attached to a diaphragm, which in turn is attached to a horn. The record is turned at a fairly constant speed by a spring-driven motor. As the record turns, the grooves make the needle vibrate back and forth. These vibrations are transmitted to the diaphragm, which itself vibrates, creating sound. That sound is then channeled out of the horn into the room.

Early records were made by machines that worked like gramophone players, only in reverse. Musicians would play into the horn, which would channel the sound into the diaphragm. The diaphragm would transfer the sound vibrations into a needle. The needle itself rested on a record topped with a layer of wax. As the needle wiggled, it would inscribe the sound into the wax. Finally, the record would be treated to fix the recording so it could be played back.

How Does a Record Player Work?

Around The Home
Entertainment
By: Joseph Nicholson

What is the Difference Between 33 & 78 RPM Records?

Around The Home
Entertainment
By: James Gilmore

How Does a Cassette Player Work?

Around The Home
Entertainment
By: Lauren Vork

How to Repair Deep Scratches on Vinyl Records

How to Change a Record Player Needle

Around The Home
Entertainment
By: Michael Francisco

Around The Home
Entertainment
By: Robyn Murray