How Do I Reduce the Soap Opera Effect on My LED TV?

Despite the name, the soap opera effect isn't wasting the potential of your flashy new television by watching the same old shows every day. Instead, it's related to the way your TV screen processes video footage. For most manufacturers, the soap opera effect is a deliberate feature designed to improve viewing under certain circumstances, but if you don't like it, it's usually easy to disable in your TV's settings menu. 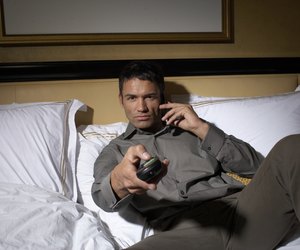 A man is pointing a remote at a TV.
credit: Andrea Chu/Photodisc/Getty Images

Like many elements of TV screen viewing, the term "soap opera effect" is somewhat subjective, and different users may have different experiences. The easiest way to imagine it is to think about the way a daytime soap and a high-budget action movie each look. Normally, the soap will feel much softer, any movement will be ultra-smooth and seem almost slow, and the whole thing will look low-budget; the movie should feel much sharper, and the movement will feel much faster-paced with a heightened clarity.

Compared with the technology used in other types of TVs, liquid crystals are relatively slow to change state, increasing the risk that the viewer will notice a jarring change in the image from frame to frame. To compensate for this, LCD TVs often use modes in which they create numerous artificial images so that most or every frame displayed is only slightly different from its predecessor. Sometimes the rate of change between each of these images -- both real and artificial -- is so slow that the soap opera effect becomes visible.

Because the soap opera effect is intentionally created by a specific setting, you can almost always switch this off in the settings menu. The trick is to determine the name of the feature, which is technically called motion interpolation processing, but manufacturers have different names for it, such as LG's TruMotion, Samsung's Auto Motion Plus and Sony's MotionFlow. As a rule of thumb, look for a setting containing "Motion"; if you can't find one, look for "Clear" or "Smooth" in the name. Consult your TV manual as you may be able to assign different modes to different inputs, such as a cable box or Blu-ray player. This means that you could take advantage of the mode while watching sports TV, but switch it off to watch movies on disc.

Whether its better to have a motion interpolation processing mode switched on is purely a matter of personal preference. Some viewers prefer watching movies without it, simply because some people tend to expect movies to look a particular way. One theory is that movie-goers expect fictional movies to have a highly vibrant, sharp and slightly unrealistic feel compared with "real life" film such as documentaries. One downside of switching off such a mode is that the mode may also reduce judder. Judder is caused with 24fps film content in which your TV set may show some frames more than others. For example, in scenes where the picture changes rapidly, such as when the camera pans, judder can create the unsettling effect that ime is ever-so slightly speeding up and then slowing down.

How to Fix Motion Blur on an LCD TV

What Causes Jerky Movements on My LCD TV?

What Does "Smooth Motion Effect" Mean on a Vizio TV?

How to Film a Computer Screen

Around The Home
Entertainment
By: Rianne Hill Soriano