How Does a Computer Process Data?

Simply put, data is information. Data can be numbers, strings of characters or images. All data must be entered into the computer for it to be processed. Data can be read out of a file, typed in via the keyboard or scanned in like a bar code. From a computer programmer's viewpoint, this is considered raw data that needs to be processed. 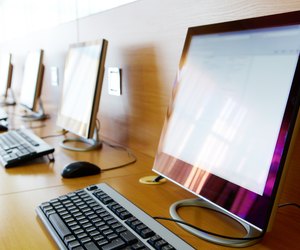 Why use a computer to process data?

Computers process very large amounts of data because they can interpret the data much more quickly than a person. Most data processing is mundane, and would be prone to human error if not processed by computer. Computers process data so fast that their speed is measured in MIPS (Millions of Instructions Per Second).

A computer uses a Central Processing Unit or CPU to do all its decision-making and data processing. The CPU has an internal set of instructions it follows when it receives a command. Programmers use different languages to give the CPU commands. These languages are more human readable than the CPU's machine language. The CPU follows the programmer's logic to process the data given it.

Part of the programmer's instructions will be how to save the processed data. Again data can be written to a file, but output usually goes to a printed report as well. A payroll system will produce several types of output, it prints checks, updates accounting databases and produces files that are sent to the government to show the amount of taxes withheld.

Garbage in, garbage out.

The data that is input to the computer must be good data, or the output will be useless. Computers on their own are unintelligent machines. They follow the instructions given them, and process data without thought.

How to Open a .Data File

Around The Home
Productivity
By: Lindsay Howell

What Are the Four Components of Computer Processing?

Around The Home
Productivity
By: Comte de Dirac