As of 2011, Google is the most popular website on the Internet, fielding literally millions of queries each day. Of the available Google services, 6.92 percent of the site's massive amount of traffic goes to Google Maps, according to Alexa. Google maps offers everything from street-view and real time pictures of certain locations to driving directions. If you're looking for directions and travel time for a destination, understanding how Google calculates driving time gives you a better idea of how that time is applicable to your trip. 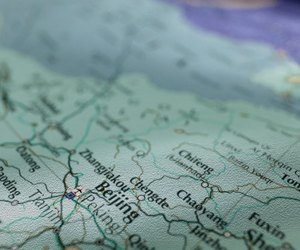 When you input a starting point and a destination into the Google Maps interface, it first calculates the fastest route to get from point A to point B. You can toggle your settings so the service finds routes with fewer stops, routes that avoid freeways and routes that match other specifics. When you change the route, the travel time also changes to reflect the specifications you've made, which are calculated and added to other factors that determine the overall travel time.

The original travel time for any given route is calculated using the average speed limits along the route. Google collects data on the speed limits of major highways, freeways and streets to give the most accurate travel time possible. The average time you see when you plug a route into the Google Maps interface is one calculated using that specific data, but since travel speeds vary, it's not always the most accurate estimate.

It's important to remember that when you track a route through Google Maps, all information is an estimate. Google Maps cannot take into consideration your personal driving speed or unexpected conditions, which is why the travel time presented to you might not always be completely accurate. Use common sense and judgement to ensure you arrive on time based on your personal specifics, such as speed and stops on the way.

Around The Home
Productivity
By: Seamus Islwyn

How to Program Garmin With Specific Routes

What Does a GPS Simulator Do on a Nuvi?

Around The Home
Productivity
By: Tricia Lahl

The Average Hits Per Day on Google Analytics

Around The Home
Productivity
By: Jimmy Boyd

Around The Home
Productivity
By: Nicole Martinez