How Does Metal Affect a Wireless Signal?

Wireless signals affect radio waves. Radio waves are formed by a variable electromagnetic field. Unfortunately, metal is a conductor of electricity and magnetism, and so it absorbs radio waves. The more metal a building has in its structure, the worse the radio reception is for the people inside. 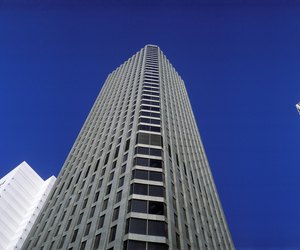 Wi-Fi routers and network adapters transmit and receive data by pulsing a current to a copper wire inside their antennas. One end is grounded, but the other end is unconnected. When a current passes along a wire, it generates a magnetic field around that wire. The pulse of the wire radiates out as radio waves. The receiver is another copper wire that attracts passing magnetic radiation from the radio waves generated by the Wi-Fi transmitter. The receiver is a thin piece of wire and so does not cast much of a shadow in the radio wave footprint. Larger metal objects, like refrigerators, however, are a different matter.

Metal is a conductor. That means it absorbs electricity. As radio waves are electromagnetic, metal also absorbs those. It is the conductive capacity of copper wire that makes the receiving antenna capture the incoming radio signal. The same is true for other metal objects, although those other objects are not connected to any mechanism to interpret the radio waves into data or sound, and so the waves just stop there.

An area behind a large piece of metal is called a "dead zone." Those locations do not receive any signal, because they are in the shadow of a metal object. Many construction companies use metal foil as part of insulation, often entirely encasing a new home in metal foil, beneath the outer brick skin. These home would not receive any incoming wireless signals. However, if their Wi-Fi service is delivered over cable, the internal reception of a Wi-Fi router would be improved, because Wi-Fi signals would be would be trapped inside the house, mirrored back and concentrated. Another benefit of a metal outer shielding for buildings is that it prevents waves from the Wi-Fi box leaving the building. This gives extra security, removing the possibility of unauthorized access to the network.

Metal is not the only substance that blocks Wi-Fi signals. Water is also a conductor and will block signals just as firmly as metal. Brick and concrete impair signals by 90 to 95 percent. Glass has low conductivity, but this increases if it is heated.

How Do Wireless Transmitters and Receivers Work?

Around The Home
Entertainment
By: Drew Nelson

How to Limit a WiFi Signal

Around The Home
Productivity
By: Clifton Watson

How to Reduce Interference on FM Radios From Fluorescent Light Bulbs

Around The Home
Entertainment
By: Theresa Custodio