How to Detect If a Computer Has Water Damage

Because of their need for air flow and cooling, most computers (and consumer electronics devices) cannot be made waterproof. Computers that have fluids spilled on them or in them can have several symptoms of water damage, or damage from other liquids, like drinks. In a surprising number of cases, the water damage can be remedied by a technician. 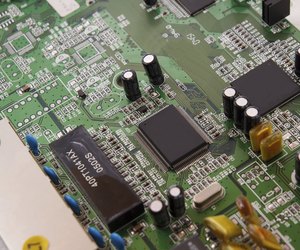 If the immediate danger of a short circuit is avoided, the main risk from water damage is corrosion.
credit: Mehmet Cay/iStock/Getty Images

Turn the Computer Off

The single greatest hazard to a computer that's had liquid spilled on or in it is an electrical malfunction. Turn the computer off if you think that water damage has occurred. You are unlikely to risk injury from electrocution from a wet computer, unless you're poking around in the power supply of a desktop machine. The equivalent circuitry for a laptop is in the power brick you use to convert AC wall power to DC current; the rest of the components in your computer have their voltage stepped down. You're at far greater risk of an electrical short that ruins something in the computer itself.

Perform an external exploration and examination of the case. Check to see if the keys are sticky, or tend to "stick" at the bottom of their traverse; this is a sign that the keyboard had something spilled on it. Look for evaporation marks on the case, or signs of sticky fingers. If you've got a laptop, and it was closed, there's a chance that a spill on the outer surface of the clamshell harmed nothing. If there are signs of evaporation around the vents of the computer or on the surface, there's a good chance water made it inside the case.

Open the Case and Examine the Motherboard

If you're using a desktop machine, opening the case is fairly easy – look around for signs of evaporation on the motherboard and other components. If you see them, photograph them and show them to your service technician. If you're using a laptop, consult the manual for your laptop manufacturer before trying to access the motherboard. Water that makes it into the LCD screen will render the display largely unusable.

If the computer was running when water hit the electronics inside, the odds that you'll be able to recover the computer are minimal. You can usually recover the hard drive or SSD and get your data off of it, but chances are that the water has short circuited something on the motherboard, daughter cards or elsewhere in the case.

If water entered the computer's chassis while it was off, disassemble the computer as far as you're able, and let each component dry in a closed zip-top bag with silica gel (or mesh bags with uncooked rice). If there is any sort of residue, use a moistened toothbrush to clean it off. You will also want to do this to the switches under the keyboard to make sure that nothing's making the contacts sticky.

How to Fix MacBook Water Damage

Around The Home
Productivity
By: Ann Mapleridge

How to Clean a Greasy Laptop Keyboard

Around The Home
Productivity
By: John Zaremba

How to Clean a Laptop of Smoke Smells

Around The Home
Productivity
By: Mary Ylisela

How to Clean Under the Hood of Your Computer

What Is the Fan Function in a Computer?

How Do I Lower PC CPU Temperature?