How to Make an Absolute Value Sign on a Computer

You can usually represent absolute value using two vertical bars, which you can type on most keyboards. On a smart phone, you may have to click to a symbol menu in your phone's on-screen keyboard. Certain programming languages and typesetting systems such as LaTeX will have their own ways to display absolute value. 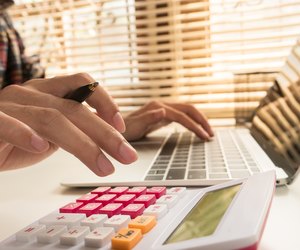 The absolute value is replaced by surrounding a numeral or variable with two vertical bars. You can often use the "|" to represent an absolute value if you're typing on a computer keyboard.

This symbol is also widely used in Unix systems, including Linux and macOS, where it's referred to as a "pipe." It's used to feed the output from one program into another. It also has various other meanings in various computer programming languages.

If you're going to be writing for an audience who might not be sure what the symbol means in context, you might want to explicitly explain it on first using the symbol.

On most computer keyboards, you can find the "|" symbol above the backslash, which looks like "". To type it, simply hold down the shift key and strike the backslash key.

On a smart phone, you will likely need to hit a symbols key to access this symbol with a few extra taps.

If you find you're frequently hunting for mathematical symbols on your smart phone, you can often install a special math keyboard plugin to make them easier to find. Check your phone's app market for details.

Computer typesetting systems often have their own ways to represent certain symbols and mathematical concepts.

LaTeX is one popular typesetting system. You can type an absolute value symbol in LaTeX by typing "\mid" and it will be replaced by the symbol when you generate your output.

How to Do a Straight Vertical Line on a Keyboard

How to Type the Pi Symbol

How to Do Plus and Minus on a Mac

How to Type the Water Symbol

How to Type the Cent Symbol on Your Computer

How to Use the Euro Symbol on a Dell Keyboard