How to Put in Accent Marks Using Microsoft Word

There are three ways to add accents to letters in Microsoft Word 2013: keyboard shortcuts, the Windows Character Map and a change in Language Preferences.

Keyboard shortcuts are often the fastest way to type accented characters in a Word document. For accented letters, these shortcuts all use Ctrl or Ctrl-Shift with a symbol, followed by the letter you want accented.

For example, to use an accent grave, press Accent Grave -- located beside the 1 on most keyboards -- and the Ctrl key at the same time, followed by a letter. To type a capital letter, hold the Shift key just as you would when typing without an accent. 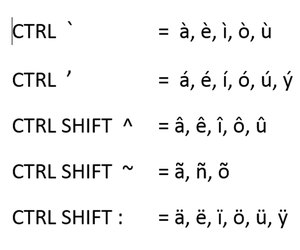 Some common accents and their keyboard shortcuts.
credit: Screenshot courtesy of Microsoft.

Microsoft has a comprehensive list of keyboard shortcuts for international characters, which you can bookmark for future reference.

If you can't remember the keyboard shortcut for an accent, use the Windows Character Map. This tool presents a small window you can keep in the corner of the screen while you work on a document. To launch Character Map, type "character map" in Windows Search.

To make formatting easier, click the Font menu in the Character Map window and select the font you're using. The default font for Word 2013 is Calibri. Of course, you can use any font in Character Map you wish, like Arial or Times New Roman, and then simply change the font in Word after the characters are all in place. 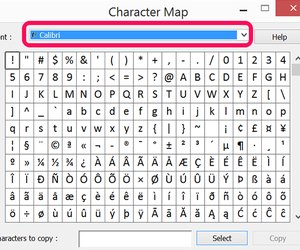 Select the font you're using in Word in the Character Map Font menu.
credit: Screenshot courtesy of Microsoft.

Select the accented character you want and then simply drag it onto the Word document where you want it to appear. 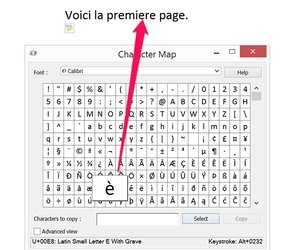 Another method is to click the Select button after you've clicked the character you want, then click the Copy button. Place the cursor in the Word document where you want the character to appear and press Ctrl-V to paste it, or right-click and select Paste.

If you're proficient in a language, consider adding it to your Windows language preferences. New system languages change the keys on your keyboard to any international keyboard you need. The key labels won't always correspond with the letters you get after changing to another language, however.

To add a new language, hover the cursor at the bottom of the Windows desktop to reveal the Taskbar and then click your current language, which is ENG for English keyboards. Click Language Preferences. 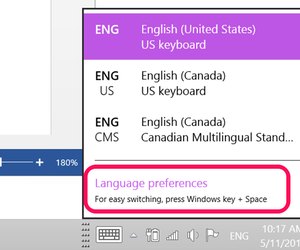 New languages appear here when you add them in Language Preferences.
credit: Screenshot courtesy of Microsoft.

Select the language you want in the Add Languages window. After the language is installed, you can switch to it at any time from the Taskbar. To toggle through each of your languages, press the Windows key and Space Bar simultaneously. Unless you actually have an international keyboard, you'll have to memorize the placement of the new key locations. 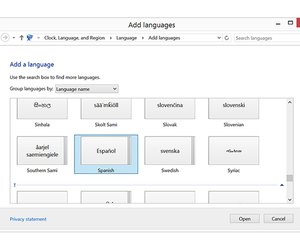 Add as many languages as you need in Windows..
credit: Screenshot courtesy of Microsoft. 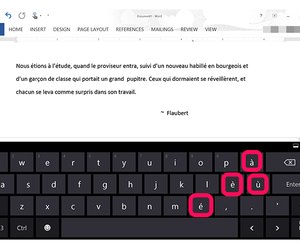 How to Switch a Keyboard Back to English

How to Insert Spanish Symbols in Microsoft Word

How to Insert the Pi Symbol in Word

How to Type Spanish Accents on a Keyboard

Around The Home
Productivity
By: Lester L'Fayette

How to Use Accent Marks on an American Keyboard

How to Write Arabic in MS Word