How to Shorten a Video with Media Player

Windows Media Player 12, which is included with Windows 7 and later versions, supports playback for a wide range of audio and video formats. It does not provide video editing functions. You can shorten the length of a video by speeding it up, but you can't trim a video and save the change. If you have Windows 10, you can trim a video using the free Photos app. Another alternative is to download a third-party Windows Media Player editor plug-in that supports trimming. 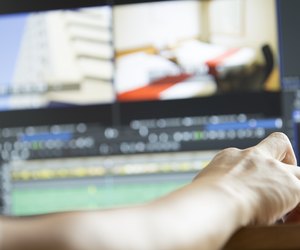 Windows Media Player 12, which is included with Windows 7 and later versions, supports playback for a wide range of audio and video formats.
credit: okugawa/iStock/GettyImages

Speeding Up a Video in Media Player

To change the playback speed of a video in Windows Media Player, right-ckick in the Media Player playback window and go to Enhancement. Select Play speed settings on the pop-up menu to display the controls for speeding up and slowing down the playback of the current video. You can view the file at different speeds, but you must change the setting each time you play it back. There is no way to save the setting with the video file so that it automatically plays back faster.

Microsoft doesn't provide editing and file-saving capabilities in Media Player, but you can download a plug-in developed by a third party that can handle it. An example of a popular Windows Media Player trimmer plug-in is the SolveigMM WMP Trimmer. You install a plug-in to your version of Media Player by clicking the Tools menu in Media Player and selecting Plug-ins. If you downloaded the plug-in correctly, its name displays on the Plug-ins menu. Select the plug-in name to install it.

Before downloading and installing a plug-in, do some research and make sure it runs with your version of Windows. Avoid malware by only downloading plug-ins from reputable software companies. If you have problems starting or running Media Player with a plug-in, you may need to uninstall and then reinstall Media Player.

If you run Windows 10, several Windows media cutter apps are available in the Microsoft Store that you can use, but you don't need to download a specialized app just to trim the length of a video. Instead, you can use the Photos app that comes bundled with Windows 10. The app also allows you to customize a video with slow motion, 3D effects and text. You can use a drawing tool to draw lines and other images directly on your video. All changes can be saved to a new video file.

To open a video in Photos, right-click on the video you want to edit and select Open with followed by Photos. In Photos, select Trim under Edit & Create to open a video editor window with a scale control that allows you to trim from either the beginning or end of the video. Click on Save a Copy to save your edits or Cancel to stop editing without saving your changes.

How to Stream Video on Windows Media Player 12

Around The Home
Productivity
By: Theodora Pennypacker

How to Change the Frame Rate in VLC

Around The Home
Productivity
By: Aurelio Locsin

How to Find Media Player on My Computer

Around The Home
Productivity
By: Lindsay Howell

How to Burn Copyrighted DVDs With Nero

How to Frame by Frame in VLC

Around The Home
Productivity
By: Larry Simmons

How to Change the Buffer for Hulu

Around The Home
Entertainment
By: Quinn Marshall