How to Splice the Wires for a Security Camera

You get the best picture from a security camera when the cable makes a single continuous run directly from the camera to your PVR or monitor. Unfortunately, that ideal scenario doesn't always work out, and you need to extend a wire because you didn't measure correctly or because you moved either the camera or its PVR to a new location. The type of cable you're using determines how you splice in that extra length. 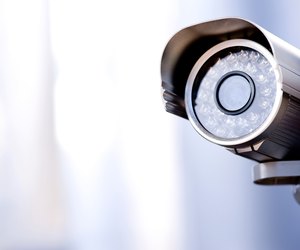 You get the best picture from a security camera when the cable makes a single continuous run directly from the camera to your PVR or monitor.
credit: woraput/E+/GettyImages

There are two types of cameras your security system might use, the traditional analog type or newer digital or "IP" cameras, so called because they use home networking's internet protocol.

IP cameras are designed to use Ethernet cables, the same kind you see going in and out of your router. Usually, they carry both the signal from your camera and the power that runs your camera. That's referred to as "power over Ethernet" or PoE.

Most analog cameras are designed to use what's called a 3-wire or Siamese cable, which combines a regular TV-style RG59 cable to carry the video signal with a positive and negative wire to power the camera. These are shielded and can be used over greater distances than Ethernet cables. Some add one more wire to carry audio and are referred to as a 3.1 cable. Some add another for cameras that can be tilted and panned with a built-in motor and are called 4.1 cables. The extra wire powers the motor.

You can buy CCTV cables for your camera that already have connectors installed or bulk cable with no connectors. Bulk cable is cheaper, and it's easier to fish through walls and ceilings, but pre-made cables save you buying connectors and the tools to install them. Splicing bulk cables requires a modest degree of expertise, as well.

If your cable has connectors already, a coupler is the simplest option for extending its length. Ethernet cables use a plastic connector called an RJ12 plug, and the coupler for those is a small plastic box with the female RJ12 jack at either end. Simply clip your old cable into one end and your new cable into the other. There's always some play in those connectors, so it's good practice to wrap them in tape to immobilize them physically and prevent them from causing interference.

The video portion of a Siamese cable usually has a push-and-twist BNC connector. The coupler for those is a simple cylinder with lugs at either end. Push the old and new cables onto either end and twist to lock them in place. You don't need to tape a BNC coupler.

The power wire may have a male 2.1 mm connector on the end, or it may have bare wires. You'll be hard-pressed to find a coupler for those and usually need to remove the male connector from one cable and replace it with a female 2.1 mm connector. They're available in both solder-on and solderless versions.

An Ethernet cable contains eight wires, divided into four color-coded pairs that are twisted together. You often hear them called twisted-pair cables for that reason. To splice them, remove the outer insulation to free a few inches of the wire at the end of each cable. It's good practice to slide a piece of heat-shrink tubing over the end of one cable before you start, so when you're finished, you can shrink it to protect and immobilize the splice.

The cables are color-coded, so strip them one at a time and splice each one individually to its corresponding wire on the opposite cable. You can solder them or crimp on small butt-type connectors, whichever you prefer. The wires are fine, so either option requires patience and a steady hand. Wrap each wire with tape after splicing it, to reduce the risk of a short circuit. Continue until all eight wires are spliced. Then, slide the heat-shrink tubing into place and heat it to tighten.

With a 3-wire security camera, splicing the power wires and the RG59 cable are two separate processes.

The RG59 is a shielded coaxial cable, meaning it contains layers of insulation and wire wrapped inside of each other. The inner wire carries the actual signal, and an outer wire in the form of a woven braid acts as shielding. To splice one without using connectors, strip the outer insulation from the braid and pull it away from the cable, twisting as you go. Then cut away the inner insulation from the center wire, which may be braided or solid.

The power wires are typically red and black. Connect red to red and black to black, soldering them in place or using butt connectors or B-type connectors. Wrap each splice separately with tape to insulate it, unless you're using insulated butt connectors, and then finish it with heat-shrink tubing.

If your camera requires a 3.1 or 4.1 wire cable, the process is essentially much the same as for a 3-wire camera. The additional wire or wires are color-coded, and you match color for color. The extra wire in a 3.1 cable may not have the same color from one brand to another, but it is not the one that's black or red.

If the extra wires in the 4.1 cables you're splicing don't match for color, or if the power lines in a 3-wire cable are not black and red, you may need to refer to a wiring diagram to identify them reliably.

Around The Home
Entertainment
By: Jacob Workman

How to Splice Ethernet Cables

How to Remove Connectors From Coaxial Cable

Around The Home
Entertainment
By: Nathan McGinty

How to Build a VHF UHF TV Antenna

Around The Home
Entertainment
By: Cassie Skelley

How to Fix a Coax Cable That Is Cut in Half

Around The Home
Entertainment
By: Quinten Plummer

How to Splice an RCA Cable

Around The Home
Entertainment
By: Adam Hilton