How to Use the Outliers Function in Excel

When you're analyzing data, outliers can skew the results and make them less reliable. For example, if one or more of your values are substantially higher than the majority of the data, they make the mean higher, which might not reflect the data as a whole. Removing these outlying data points is, therefore, an important step in performing reliable statistical calculations. With no dedicated outliers function, the easiest way to perform an outlier test in Excel is to use the interquartile range to identify outliers, but you can also use the Trimmean function to approximate the same result. 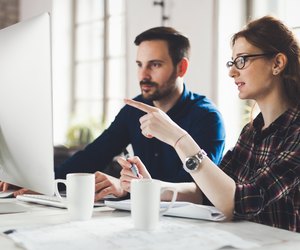 The interquartile range of data is the range covered by the "box" on a box-and-whisker plot, or more precisely, the result of subtracting the value for the first quartile of the data from that of the third quartile. Excel contains a built-in feature to calculate any quartile for your data. Find a spare cell and type "=QUARTILE([data range], [quartile number])" and put the range of cells for your data where it says "[data range]" and the quartile you want where it says "[quartile number]."

For example, if you have data in cells A2 to A101 and you want the value for the first quartile, you enter "=QUARTILE(A2:A101, 1)" to find the value. For the first part of the argument, you can highlight the relevant cells with your mouse, but after the comma, you need to write the number of the quartile you want. For the third quartile with the same data, you type "=QUARTILE(A2:A101, 3)" to get the result.

Anything below the lower limit or above the upper limit is an outlier.

To finish the outlier test in Excel, use the logical "OR" function to identify which values in your data class are outliers in an efficient manner. Enter "=OR([data cell]>[upper limit], [data cell]<[lower limit])" to find the outliers, with relevant cell references in place of the quantities in square brackets. For example, if the data is in cells A2 to A101, the upper limit is in cell F2, and the lower limit is in cell G2, go to cell B2 and type "=OR(A2>$F$2, A2<$G$2)" to use the function (where the dollar signs before "F," "G" and "2" tell Excel that this shouldn't change when you drag the formula down).

If the value in A2 is above the upper limit or below the lower limit, it displays "TRUE," indicating that the value is an outlier. You can drag this formula down by clicking the bottom right corner of the cell with the formula and dragging it down so that it finishes beside the final data cell to perform the same calculation on each data point.

You can also highlight the data, and go to "Conditional Formatting" in the "Styles" section of the "Home" tab if you want to change the formatting for the outliers. Choose "New Rule" and highlight the "Use a formula to determine which cells to format" option. Type the same formula as in the previous paragraph and then click the "Format" option to choose the unique formatting for outliers.

The "Trimmean" function is a simpler way of identifying outliers. Type "=TRIMMEAN([data range], [proportion to trim])" to use the function, with the range of cells containing data in place of "[data range]" and a decimal percentage you want to trim where it says "[proportion to trim]." This removes the extreme values at the top and bottom and then calculates the mean based on those remaining. So, if you trimmed 10 percent, it would remove the top 5 percent and the bottom 5 percent before calculating the mean.

How to Find the Upper and Lower Bounds in Excel

How to Calculate Range in Excel

How to Find the Z-Score Using Microsoft Excel

How to Calculate Normalized Data in Excel

How to Use Excel to Calculate a Confidence Interval