How to Write Pseudocode for a Calculator

Many computer languages share common tasks such as iterating through loops, branching based on if-then-else logic and performing calculations. You can use these and other operations to construct a pseudocode program that does not run on a computer, but instead runs in your mind as you review it on paper. By brainstorming a process, identifying high-level processes and writing them down logically, you can use what you come up with to create quality software, using real programming languages. 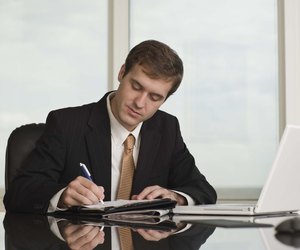 Think about what it takes to make a calculator work at a high level and write down those high-tasks on a sheet of paper. They might appear as shown below:

These are the actions that occur when you type numbers into a calculator, press a function key and view the results. The first statement calls a method that reads input from a user. That method returns results which go into the Input_Data variable. The next statement passes that data to a function named Perform_Calculations. Perform_Calculations calculates a result and returns it to this code which stores it in the result variable. The final statement passes that result to a function that displays it.

The firstNumber, secondNumber and operator variables will contain the values a user enters via some method. The final statement returns the variables to the calling module.

Draw a second box on the paper and write "Perform_Calculations(firstNumber, secondNumber, operator) at the top of it. Add statements to this box needed to perform calculations using the two numbers and operator passed to the function. Those statements might look similar to the following statements:

Draw a final box on the paper and write "Display_Result(result)" at the top of the box. Write down the statements needed to present the result to a user, such as this:

Review the pseudocode and follow the logic beginning at the first statement in the main module. Look for logical flaws in the code as you step through it. Identify those if they exist, and correct your pseudocode if necessary.

How to Convert Int to String in Python

How to Square in Python

How to Use Echo in Python

Around The Home
Productivity
By: Matt Fregoe

How to Convert From Java to PHP

Around The Home
Productivity
By: Joey Liam