Back in the days of cathode ray tube televisions, a good, sturdy set from a respectable manufacturer could easily last 20 years. When flat-screen televisions first appeared on the scene, they drew upon relatively new and unrefined technologies, meaning high failure and defect rates. Over time the technology has matured, however, and today you can once again buy a television that has a good chance of lasting 20 years. LED sets promise to be some of the most long-lived televisions on the market. 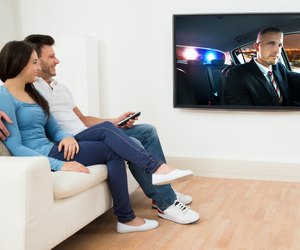 The realities of mass production mean that a few of the units rolling off the line are lemons, doomed to fail much younger than they should. Whether you get a long life out of your TV depends somewhat on this element of chance, but you can influence the odds in your favor by buying a respected brand name, which lowers your chance of getting a lemon, and by taking good care of your set at home, which lowers your chance of aggravating any defects lurking inside your set.

Excessive heat kills electronics. Theoretical lifespan projections assume that you will keep your LED television well-ventilated and protected from heat sources such as sunlight, heating vents, lamps and other large electronics. To prolong the lifespan of your LED television, avoid these heat traps; keep the ambient room temperature between 65 to 75 degrees Fahrenheit.

LED televisions are a special class of LCD televisions. They differ in that the older LCD technology uses cold cathode fluorescent lamps to light up the liquid crystal screen, while LED sets use thousands or millions of tiny LEDs, or light-emitting diodes. LEDs consume significantly less power than CCFLs. They generate less heat and don't burn out nearly as quickly as CCFLs, meaning that LED sets tend to last much longer than LCD sets.

Effects of Humidity on an LCD TV

Around The Home
Entertainment
By: Scott Danielson

Around The Home
Entertainment
By: Kay Ireland

My Samsung LED Has Dead Pixels

Around The Home
Entertainment
By: Laurie Brenner

How Long Can a Plasma TV Be Left On?