As technology improves, old cathode ray tube, or CRT, televisions give way to lighter weight, higher definition flat screen versions. These screens also use less power than a CRT, making them a more environmentally friendly option. However, not all flat screen televisions are the same. Consumers can choose from plasma screens, CCFL LCD televisions and newer LED TVs. 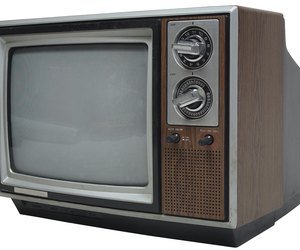 Old CRTs can be expensive and difficult to dispose of.

CRT televisions use relatively large amounts of power for their size. According to Agilent, a CRT television requires about 0.3Watt per square inch. However, some CRTs actually use less power than modern high definition flat screen televisions. The HDTVs have larger screens and a greater area, causing them to pull more power. When deciding whether to update a CRT to a flat screen TV, measure the total screen area to determine how much power you'll use.

LED TVs are a subset of LCD televisions that uses even less power and produces a more reliable picture. LEDs offer greater efficiency and several power-saving features. This type of television comes mostly in HDTV format and provides a wide range of extra features at a higher cost than LCD televisions with fluorescent backlighting. According to CNET, high-end LED televisions use around 0.1 Watt per square inch at default settings, and closer to 0.075 Watt per square inch when calibrated to the individual user.

Upgrading your television isn't necessarily the environmentally friendly choice, either. Even if the LED TV you choose uses less power, the environmental impact of manufacturing and transporting it often results in a net loss. Making high quality glass and semiconductors uses large amounts of energy. Plus, disposing of an old CRT can be tricky. These machines contain relatively high concentrations of lead and phosphors, which can cause serious pollution problems if not disposed of properly. Most recyclers don't handle CRTs or they charge a high fee to deal with them.

How to Tell If a TV Is LED

Around The Home
Entertainment
By: Jess Kroll

How Many Watts Does a Computer Use?

Around The Home
Productivity
By: E.D. Strong

How Long Can a Plasma TV Be Left On?