Chrome vanadium is a special kind of steel formed by combining different alloys. The substance, standardized as ASTM A-231 in industrial nomenclature, is most often used in making steel tools, large-diameter spring wires, and other high-stress applications. Physical, chemical, and mechanical properties of chrome vanadium give it specific load tolerances, corrosion resistance, hardness, and behavioral characteristics (especially after welding and stress-relieving actions), which make the substance ideal for certain applications. In manufacturing, chrome vanadium is cold-drawn and heat-treated before fabrication, giving it properties to bear shock loads in elevated temperatures. 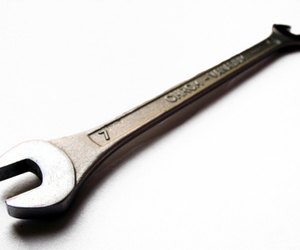 Chromium vanadium is an alloy used to forge steel tools.

Chrome vanadium is formed by combining chemicals in different proportions. The percentage of each constituent component in the formation is based on characteristics sought from the finished product. Typically, chrome vanadium contains a high amount of chromium, between 0.80 and 1.10 percent, and the vanadium content is approximately 0.18 percent, along with 0.70 to 0.90 percent of manganese. Other substances include 0.50 percent carbon, 0.30 percent silicon, and trace amounts of other metals. When proportions are altered, the overall properties of the chrome vanadium steel may change and may behave differently in certain applications.

The hardness of industrial substances is an imperative physical attribute because it specifies which applications a material is suited for. Based on a measurement system known as the Rockwell Hardness Scale, chrome vanadium is designated C41-55. In evaluating hardness, the Rockwell method measures the depth of penetration made by a load on a substance. Chrome vanadium is structurally strong, and its toughness enables it to withstand high fatigue and wear. In sheet form, the substance can be cold-formed into different shapes and can be folded, flattened, and influenced into intricate forms without any signs of breakage or any type of structural degradation. Chrome vanadium is available in different grades, which are used according to specific properties of the grade. For example, a variant standardized as SAE 6150, with medium to high carbon content, is ideal for use in springs, and another variant with high carbon content, coded SAE 6195, is used in manufacturing ball and roller bearings.

How Does a Diamond Tester Work?

Around The Home
Entertainment
By: Deb Lindstrom

How to Calculate Durability

Around The Home
Productivity
By: ROSEW

Around The Home
Productivity
By: S.L. Stoddart