Quality of Service make modern phone lines, TV service and video games "play nice" while using the same wire. Streaming services, such as Netflix, must take precedence over certain other traffic on your router, or else the playback will suffer. To ensure the best Netflix experience, you can make changes on your router, your PC and within Netflix itself, to recognize QoS packet tags and control the bandwidth used. 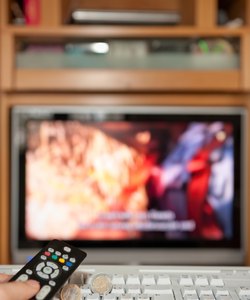 Unlike traditional TV, Netflix has to compete with other devices in the house for bandwidth.
credit: Rainer Rössler/iStock/Getty Images

In a home or small office network, the best thing you can do is ensure that Netflix runs on a separate device, such as a Roku, Chromecast dongle or a computer dedicated to the task. Doing so will allow you to set QoS rules according to that IP address. This is important, because Netflix's delivery methods often prevent a network from differentiating its traffic from anything else sent through a Web browser. This device should be connected by wire to the network, if possible.

Most QoS settings use a system called "differentiated services code point" built into the very framework of Internet communication. By setting the DSCP bit, routers across all networks know which packets should be delivered first. Routers, however, won't recognize these differences if their QoS is not set. Cisco systems, a preeminent name in QoS engineering, recommends that computers or services streaming video, such as Netflix, have those packets set to a DSCP classification C4. These packets, by default, are prioritized over most other traffic, but they will still yield to critical services, such as Voice over IP.

If you're unsure whether your router supports DSCP, then you should use QoS to classify packets based on IP. Using the IP of the Netflix device or computer on which you wish to stream video, give a guaranteed minimum bandwidth of 5Mbps. This is the minimum amount needed by Netflix to stream high-definition video. Setting it to this level ensures that the path to the Netflix device will always have enough bandwidth, even in a high-traffic environment.

In some instances, your network simply may not have the capacity to run HD video. Under these circumstances, you can avoid hiccups and delays by forcing Netflix to stream in standard definition. Standard definition requires only 3Mbps, and can be forced by unchecking the "HD" check box at the bottom of the Netflix player. Most Netflix players, by default, will automatically reduce the quality of the video if it detects low bandwidth, but setting this option will prevent the player from bouncing back and forth between the two modes in a tumultuous network environment.

Around The Home
Productivity
By: Elizabeth Smith

Around The Home
Productivity
By: AnthonyO

Around The Home
Productivity
By: Nicole Schmoll

How to Get Netflix on My Sanyo TV