Netflix is a service that offers video rentals by mail as well as streaming video to computers, game consoles and other devices. To ensure the best quality and streaming bitrate from the Netflix streaming service, check your router's speed to determine that it isn't slowing or blocking Netflix. If your Netflix-compatible devices use a wireless connection, you may need to double-check your wireless network settings as well. 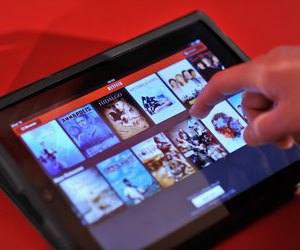 Netflix streaming content is available to all Netflix subscribers except for those who have a DVD-only service plan. You can stream content directly to your computer via the Netflix website or to Netflix-compatible devices using official Netflix apps or channels. Devices must first be registered with your account before they can be used for streaming, a process requiring you to enter a device-specific code on the Netflix website to associate the device with your Netflix account. All Netflix streaming requires a high-speed Internet connection such as a DSL or cable broadband connection.

Though many routers allow you to stream Netflix movies and TV shows without any additional configuration, the firewalls installed in some routers may interfere with the Netflix data stream. This typically occurs when users have modified default firewall settings to restrict data from unauthorized sources or to restrict network access so that only authorized computers and devices can access it. This can be corrected by adjusting firewall settings in your router's control panel so that it allows incoming traffic or by determining that the MAC addresses of any Netflix-compatible devices are added to the MAC address filter list in your router's setup.

When using a secured wireless network, double-check network passwords and security keys before connecting computers and other devices to the network. If a security key isn't entered correctly, your device won't be able to access the network and won't receive the Netflix data stream. If your device isn't connecting to the network, set up the connection again and reenter the security key to ensure that you didn't enter it incorrectly during your last setup attempt. If you still have problems, consult the device's user manual or other documentation to determine if it's compatible with the security type you've selected for your wireless network.

How to Make AirPlay Work With Netflix

How to Remove Netflix From a Device

Around The Home
Entertainment
By: Abby Vaun

Around The Home
Productivity
By: Isaiah Turning

How to Stream Netflix to a TV With HDMI Cables

Around The Home
Entertainment
By: Quinn Marshall

How to Find My WEP Security Code on Comcast