The Components of TVs

Researcher A.C. Nielsen estimates that Americans watch, on average, the equivalent of two months of television per year. His research indicates that 99 percent of families now own a television set. The concept of TV originated in the 1880s when Paul Nipkow patented the basic idea of using photoelectric cells and light beams to create an image. The first television set was then invented in the 1920s. Today, TV sets are more sophisticated and constructed in a more streamlined way; however, the basic components remain the same. 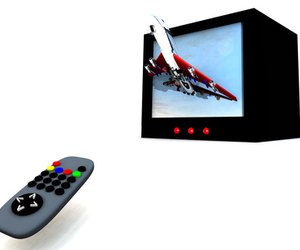 Modern televisions have similar components to the original sets from the 1920s.

A cathode ray tube enables an image to be seen on the screen of the television. It works by sending out a beam of electrons which then land on the TV screen and create a visual display.

The light valve works in conjunction with the cathode ray tube. It provides a fixed source of light that essentially lights up the electrons from the cathode ray tube so that they can be seen on the screen. Light valves have improved in quality as technology has advanced. High-definition TVs provide clearer and brighter pictures as a result of more sophisticated light valves.

The electrical wiring within a TV set consists of transformers, coils, chokes and resistors. These components are secured on a logic board. The circuit provides the correct electrical supply and sends messages to the various components of the TV set. It is the brain of the TV and enables it to function.

A capacitor is a device that stores an electrical charge between two metal plates and releases the energy as light. The capacitor in a TV set would give you a severe electrical shock if you touched it because it stores a large amount of power.

The most obvious components of a TV are the ones you can see. These are the screen and the TV surround. The material the screen is made from varies. Traditional screens were made from glass; however, more modern units, such as LCD and plasma screens, are made from plastic. The surround of the TV is the outer shell which protects the internal components of the TV listed previously. This shell is usually made of a durable plastic.

How to Reset a TV After a Power Surge

Main Parts of a TV

Around The Home
Entertainment
By: Brian Heuberger

How to Determine Flat Screen Size

Around The Home
Entertainment
By: Paul Dohrman

How to Make a Computer Screen Size Bigger on a TV

Around The Home
Productivity
By: Bryant Harland