How Are TVs Made?

Modern television sets are much thinner than their predecessors thanks to changes in the manufacturing processes. Plasma and liquid crystal display TVs have ditched the cathode ray tubes in favor of phosphor gas-filled cells. Thin TVs are designed around their screen with materials and parts added on in a sterile laboratory setting. 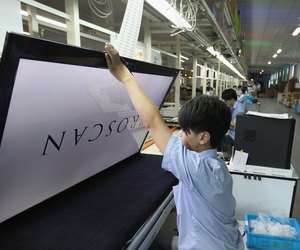 Your TV set is made up of a variety of raw materials, some that you many not expect. Glass is the largest component of a flat-screen TV and it's the starting point for TV creation. Modern TVs also use neon, xenon and argon gases combined into phosphor gas for the cells that make up their displays. Cerium is used inside your TV to improve the color of your screen. The electronics and case feature materials such as plastics, copper, tin, zinc, silicon, gold and chromium.

The TV manufacturer starts with a large sheet of glass that it then cuts into pieces for multiple screens. Plasma screens use phosphor gas and electrodes sandwiched between two glass sheets. The gas is sealed in its plasma form between these glass panes. Very small chambers are added to the back glass plate and are coated with a different phosphorescent chemical to create different colors. Each pixel on the screen contains one red, green and blue phosphor chamber.

Manufacturers also build LCD TVs by starting with the screen. LCD TVs use two thin glass sheets that are polarized and attached. The front layer is coated with color filters and a polymer that contains the individual liquid crystals. Three filters—one each for red, green and blue—are used for each pixel. Electrodes, shutters and capacitors are then added to the back sheet of glass. For LCD screens under 30 inches, plastic may be used instead of glass.

After the glass displays are created on an assembly line, they are sprayed with chemicals that add extra heat protection to the screen. Printed circuit boards are then added to the back of the display. The screen manufacturer will then send this display to a TV manufacturer for final assembly. The TV manufacturer will use injection molding to create the front of the TV set and then lays the screen into the case. Signal receivers, speakers, indicator lights and control panels are then added before the plastic backing is applied. Screws and metal for a base or mounting unit are added and then the TV is packaged and ready for sale.

What Are CRT TVs?

How Do You Clean Fingerprints Off A Flat Screen TV?

Around The Home
Entertainment
By: Melissa Rae

The Components of TVs

Around The Home
Entertainment
By: Philippa Jones

Can I Bring Home a LCD TV Laying Down?

Around The Home
Entertainment
By: Darryl Brooks

Functions of a Cathode Ray Tube