The History of Computer Monitors

Univac computer operators in 1951 didn't have a monitor to help them see what was going on inside the computer -- they'd have to take their cues from lights on a control panel flashing as the computer went about its chores. Today, computing chores are much more complex and people need monitors to communicate with their computers. When commercial monitors first started to appear around 1960, though, they were quite primitive compared to the large, vibrant flat screens of today. 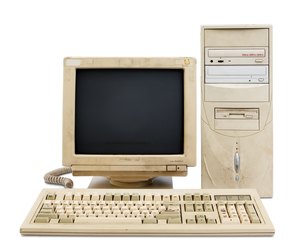 There was a time when CRT monitors were considered cutting-edge technology.
credit: Okea/iStock/Getty Images

Computing in the Early Paper Days

Monitors are output devices that computers use to convey information. People in the early computing days didn't need monitors that much because they communicated with computers using paper. Punch card machines let them type instructions on cards that a computer read. After it processed the instructions, the computer punched its output onto other cards or paper tape that humans had to decipher.

Cathode ray tubes became the first computer monitors that people used to view computer information. A CRT is a vacuum tube with one end coated with phosphors. When electrons strike them, they emit light. Because CRTs were the only displays people had, they often referred to computer displays as CRTs. Early computer operators rarely viewed text on a CRT. Instead, they used CRTs to display colorless vector graphics. As technology advanced, color CRTs that displayed text and graphics filled offices, homes and schools.

The CRT Gets Competition

Over the years, technology evolved and people built primitive personal computers that had built-in terminal devices. These devices could send composite video output to cheap CCTV monitors. The Apple I, unveiled in 1976, for instance, was the first computer from a factor that had this type of output that people could plug into a video monitor. It wasn't long before inventors created RF modulators that enabled people to connect devices such as the Apple II and game consoles to ordinary televisions.

While you can still find old CRTs for sale, they're bulkier and use more energy than modern flat panel displays such as liquid crystal display monitors. LCD monitor sales surpassed CRT monitor sales in 2007. LCDs didn't suddenly appear that year, of course; manufacturers had been creating them since the 1980s. However, the early LCDs were expensive and had performance problems. LCDs create vivid, colorful images when electrically sensitive material changes color when electrical current passes through it. LCDs also make it possible for laptop owners to enjoy high quality images, text and video on thin, lightweight screens. Examples of Output Devices of a Computer