What are the Functions of the Monitor of the Computer?

A computer monitor is a display adapter that displays information processed by the computer's video card. When a video card or graphics card converts binary information from 1s and 0s into images, these images are displayed onto the directly connected monitor. There are different types of monitors, including cathode ray tube (CRT) and liquid crystal displays (LCD). Monitors have display functions that include powering it on and off, controlling brightness, contrast and position, among others. 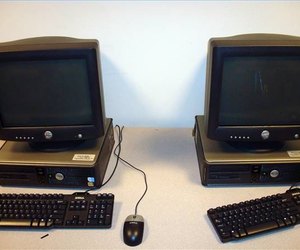 What are the Functions of the Monitor of the Computer?

CRT monitors are cathode ray tube, similar to CRT televisions. These televisions use red, green and blue electrons flowing from left to right, filling each line on the display. When these electrons hit the phosphor on the CRT, they glow for a short time. They need to be refreshed; video cards with too low a refresh rate will cause flickering of the screen. CRTs are prone to other types of problems such as images being burnt onto the screen, which is what the aptly named "screensaver" prevents.

A liquid crystal displays or LCD is a type of flat panel monitor, meaning it's designed to be thin. This feature should not be confused with flat screen, meaning the computer monitor's screen is flat instead of curved. LCDs refresh their screen differently than CRT monitors. An LCD screen is created by electric voltages hitting liquid crystal cells, allowing 64 different shades per cell. LCDs have one resolution size, and, if a smaller resolution is adopted, a black border will appear around the re-sized resolution. 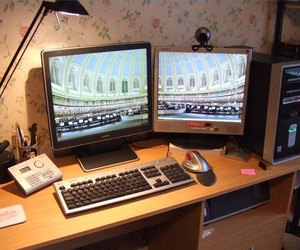 Besides buying a larger monitor, it is possible for some computers to display information on two separate monitors. This is a feature of the video card (better video cards add more features). Dual monitors work as the name implies; one monitor is set up next to another, usually side by side. In "clone" mode, the same image is displayed on both monitors. In "dualview" mode, the screens act as extensions of one another, allowing you to move the mouse cursor and windows from monitor to monitor.

Use of Dual Monitors

The clone function is good for large projections, where the user can play movies or videos on his monitor, and a copy is displayed on a larger projection for a room full of people. The dualview function is better suited for multiple tasks at once, such as viewing multiple windows, files and spreadsheets.

All monitors have a resolution type that it uses to display images. The inch sizes of LCDs tell what their resolution type is. A 17-inch display can have a resolution of 1024x768, while a 20-inch display will have 1600x1200. The number in inches is the monitor's screen size diagonally, while the resolution is the pixel width by pixel height. Although laptops have built-in monitors, some laptops come with an S-Video port, which allows an S-Video cable to plug into certain televisions. When the television is changed to the appropriate input, it will act as a clone.

How Is Resolution Measured?

How to Turn Off Multiple Monitors

How to Split a Screen onto Two Monitors

How to Connect Dual Monitors to a Dell Computer

Around The Home
Productivity
By: Tyson Cliffton

How to Flip a Monitor Screen Upside Down