After decades of watching TV on a curved screen using cathode ray tube technology, consumers are finding these television sets being phased out by flat screen models. Since their introduction in the late 1990s, flat screen TVs have quickly dominated the market due to their superior picture and compact size. The technology used to produce these sets has quickly evolved to allow for ever-increasing screen sizes and a better viewing experience. 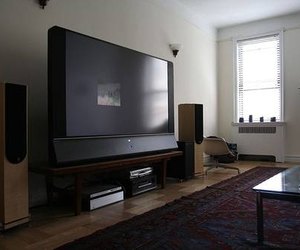 The first flat screen TV was invented in July 1964 by a team at the University of Illinois. At the time the school's computers were built using regular computer monitors, which relied on technology that was inefficient for computer graphics. To address this problem, professors Donald Bitzer and Gene Slottow created a flat screen television that emitted light using plasma technology.

After the first flat screen display was developed in the 1960s, manufacturers began to turn away from plasma technology in favor of liquid crystal displays (LCDs). At the time, LCD screens could be built much larger than plasma screens and could also be operated more efficiently. Ironically, the development of LCD televisions would delay the sale of true flat screens for decades.

In 1996 the Sony and Sharp Corporations agreed on a joint venture to produce large flat screen TVs. At the time, flat LCD screens were available, but were limited to only a few inches in size. Sony owned the trademark for a technology known as Plasma-Addressed LCDs (PALC), which blended LCD and plasma displays to create a better picture. Sony shared this technology with Sharp because at the time Sharp was the industry leader in TV production.

In 1997, Sharp and Sony introduced the first large flat screen TV. It was created using the PALC technology and measured 42 inches, a record size at the time. This first model sold for more than $15,000, making it well out of reach for most Americans. Manufacturers quickly discovered that PALC technology was too expensive and unreliable for wide-scale use, so they abandoned PALC in favor of plasma.

Throughout the next decade, prices for plasma flat screens declined rapidly as technology improved. At the same time, researchers began to look for ways to make LCD screens more viable. By the early 21st century, manufacturers were producing LCD flat screens as large as 30 inches, while plasma TVs were topping 50 inches.

By 2006, the transistors used to create LCD flat screens had progressed to the point that they were able to feasibly compete with plasma screens. That year, LCD screens were sold in sizes up to 42 inches, with virtually no difference in price between LCD and plasma models at this size. To maintain their dominant market share, plasma manufacturers added screens as large as 103 inches. By August 2009, LCD flat screens dominated the TV market, with plasma screens accounting for only 12 percent of TV sales. Many consumers preferred LCD sets because they were brighter and more efficient than plasma. Because they were based on a simpler technology, LCD TVs were also much thinner than plasma models. For very large TVs, however, plasma was still the most popular choice.

Around The Home
Entertainment
By: Erick Kristian

The History of Flat Screen TV

Around The Home
Entertainment
By: Jerel Jacobs

The History of the Samsung TV

Around The Home
Entertainment
By: Emily Beach

What Are CRT TVs?

Around The Home
Entertainment
By: Amelia Jenkins