The Parts and Functions of a Telephone

The flashy smartphone in your pocket looks very different from the bulky rotary dial landline handset of decades ago, but they both have the same basic components. Each has a power source, a transmitter, and a receiver. The biggest difference is the size of the components and the method of transmission. 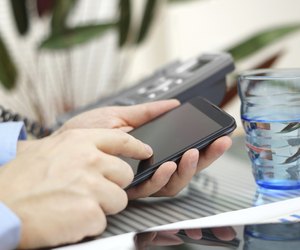 The basic telephone components are constant, whatever the form.
credit: BernardaSv/iStock/Getty Images

Old-style landline phones take their power from a safe current that passes through the cabling that runs between a home and the local switching office. Cordless home phones use a small rechargeable battery that is charged through electrical contact between the handset and its base unit. Cellphones and smartphones also have a rechargeable battery, usually Lithium. The demands placed on a smartphone battery by a voice call are roughly the same as for video playback or Wi-Fi Internet use, slightly lower than for 3G mobile Internet user, and considerably higher than for audio playback.

The transmitter turns voice sounds into electrical signals. In a landline phone, the transmitter consists of a diaphragm that vibrates in response to the sound waves of the voice. This vibration moves a set of granules of carbon back and forth. An electrical current flows through the space holding the granules and will vary based on the resistance caused by the position of the granules. The varying current then flows over the wires in the phone network to its destination.

The receiver reverses the process, turning the electrical signal back into sound. Instead of using the carbon granules, the receiver applies the current to an electromagnet, which in turn pulls on the diaphragm and creates vibrations in the form of sound waves.

In both handheld cordless phones and cell phones, the process with the transmitter and receiver is largely the same as with landline phones. The difference is that the electrical signal isn't transmitted along a cable; instead it is turned into radio waves. With a cordless phone, the waves are at a specific frequency to carry it a short distance to the base unit. With a cell phone, the waves are at a different frequency that depends on the cellphone network used by the customer; the waves travel to and from the nearest cell phone tower or relay unit.

Parts of the Landline Phone

Around The Home
Productivity
By: Miggi Sanchez

Why Are Magnets in Telephones?

Around The Home
Productivity
By: William Norman

Around The Home
Entertainment
By: Eileen Faust

How to Convert a Corded Phone to Cordless

Around The Home
Productivity
By: Marshal M. Rosenthal

How to Delete Messages From Your SIM Card

How to Connect a Corded Phone to a Headset

Around The Home
Productivity
By: April Khan