The Advantages of a Land Line Phone

Land line telephones transmit signals via a network of cables, which are either buried or suspended along poles. Since the rise of cellular technology, land line phones have increasingly been used as secondary modes of communication. While cell phones offer benefits such as mobility, text messaging and web browsing, traditional land line phones still provide several advantages. 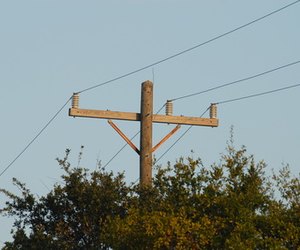 With land line phones, signals are sent and received via fixed cables.

Land line phones can be more reliable than their cellular counterparts. Disconnected cables can disable land lines, but these problems are easily remedied. On the other hand, cellular phones are plagued by several different issues because they rely on a network of radio waves, cellular towers and satellites. In some areas, cellular service is plagued by dropped calls and fuzzy reception.

The reliability of land line phones makes them advantageous when it comes to emergencies. For example, if someone is hurt and needs immediate medical care, you do not have to worry about contending with poor reception. Land lines also provide a fixed location that emergency responders can rush to. On a cell phone, you must state your address or describe your location, which wastes precious time during a crisis.

Many users find that land line phones are more comfortable to use than cell phones. The larger size of a land line phone allows users to more easily cradle the phone between their head and shoulder. This frees the hands for other activities, such as cleaning, cooking or typing.

How to Stop Phone Tapping

Around The Home
Entertainment
By: LaTasha Rogers

How to Ping a Cell Phone

Around The Home
Productivity
By: Jennifer Jones

How to Activate a Lost or Stolen Sprint Phone

Around The Home
Entertainment
By: Sylvia Cini

Around The Home
Productivity
By: Damien Richard

Around The Home
Productivity
By: Lalah Brewer

How to Reset a Phone Back to Factory Settings