Your computer has a variety of tools at its disposal to output content and media to users. When a user initiates a process on his computer, such as launching an application, it's quite likely that the intended output of that process involves more than one output medium. For example, an application may utilize sound and imagery, which would require output from both a monitor and a speaker system. With that in mind, taking the time to identify and explore the output devices on your computer may provide you with deeper insight into how this magnificent technology functions as a whole. 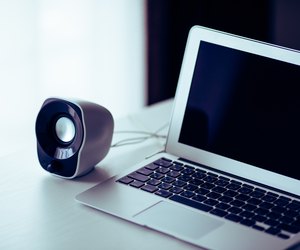 At first glance, you'll likely be able to spot many of your computer's common output devices. For example, one of the most commonly used (and important) output devices on your computer is your monitor. The monitor acts as an interface between the inner workings of your central processing unit (CPU), operating system and whatever applications you may have initiated. In its most simplistic form, a monitor can provide the opportunity for individuals to receive feedback from tasks they've implemented and also allow them to oversee their own engagement with the computer in real time. While the styling and specific functionality of monitors may differ across generations of the hardware, the core duties of this particular asset don't change.

Yet another common output device of computers is the audio speaker. Audio speakers allow users to receive aural feedback from their interactions. Whether being used as a communication tool, such as with a program like Skype, or as part of an interactive entertainment experience, audio speakers significantly improve and enhance a user's experience. Although it would be a mistake to label audio speakers a "necessary" requirement for computer use, they're certainly considered a vital element of the comprehensive computer experience.

A printer is yet another common output device which can dramatically enhance the functionality of your computer. By allowing users to create paper copies of content they author on their computer, this particular computer output tool is widely considered a must-have item for those in professional settings, as well as for individuals who may need such a device for their academic studies. Printers are available in a variety of formats, with options available for different types of ink, paper size, wireless or wired connectivity and more. Generally speaking, printers optimized for home use can be obtained relatively affordably at technology stores across the country.

How to Delete Printer History

Around The Home
Productivity
By: Meaghan Ellis

What Are the Functions of Output Devices on a Computer?

Discuss Four Basic Categories of Output Devices of a Computer

Around The Home
Productivity
By: Kristy Ambrose