As a design program, CorelDraw provides users with different tools to create original images or drastically edit them. Some of the things users are able to do with the program are QR code generation, page layout and adding various special effects. Furthermore, CorelDraw is also compatible with other programs in the CorelDraw X7 Graphics Suite, such as Corel PHOTO-PAINT, which allows users to create even more complex images. As of 2015, CorelDraw X7 is the latest version of the program and it is available for Windows operating systems.

Vector graphics uses primitives of geometry such as curves, shapes and lines. These primitives allow the user to create images that can be infinitely magnified without reducing the image's quality, explains TechTerms. In addition to this, images exported from the program keep their vector graphics qualities and can be used in other forms of editing software as well. Simply put, CorelDraw, as a vector graphics editor is made for users to create logos that are useable on various images and items, such as posters, logos, and business cards.

CorelDraw in the Professional World

As a vector graphics editor, CorelDraw is used primarily for marketing and advertising businesses, particularly those that specialize in print advertising development. Outside of logos, CorelDraw is a program used in the professional space to create brochures, newsletters and various other printable documents using its page layout features. Furthermore users use the program to create complex drawings. 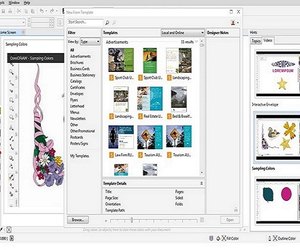 One of the key components of CorelDraw is its brushes. According to the Corel Corporation themselves, CorelDraw uses specially designed brushes to help with detailed image creation. These brushes give the designer the ability to create realistic or incredibly stylized images. In addition to its various brushes, CorelDraw also incorporates the use of layers. Through layers, graphics designers are able to create pictures that overlap each other without interacting. Layers help with different aspects of image creation, such as shading and coloring.

Using CorelDraw with Other Programs

CorelDraw is made to work with various other programs. Some of these programs, such as Corel PHOTO-PAINT, are designed to help make design easier in CorelDraw with its ability to do more with graphic design and editing outside of the use of geometric primitives. Images created in CorelDraw are usable in other programs as well. CorelDraw images may be exported in formats such as PNG and CDR, which can be opened in programs, such as Adobe Illustrator. These formats make collaboration with other designers and the alteration of images on other devices easier.

What Are the Advantages and Disadvantages of a Graphical User Interface (GUI)?

How to Use F8 in CorelDRAW to Reset to the Defaults

What Is Rendering in Photoshop?

How to Add a Logo in Photoshop

Around The Home
Productivity
By: Paul Kemp

How to Turn a Photo Into a Cartoon in Photoshop

Around The Home
Productivity
By: Valerie Berta