What Are the Different Types of Computer Cables?

Computers are complex machines consisting of many interconnected parts. While certain computer components plug directly into the motherboard, many computer devices such as hard drives, mice, and digital cameras must be connected to a system using cables or cords. There are many types of cables that can allow devices to connect to a computer. 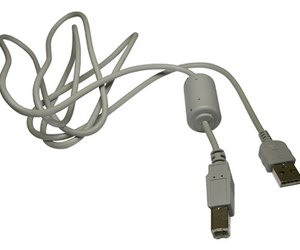 Video cables are cables that allow a computer to connect to a monitor or TV screen and output visual information. Video cables plug into the computer's display adapter or graphics card and then into a video input channel on a monitor. Computers can make use of many types of video cables. Video Graphics Array (VGA) is a standard video cable used by many computer monitors. S-Video, DVI and HDMI are other common video cables that can be used to send video to a monitor. HDMI is the only video cable that also sends audio signals. S-Video, DVI and HDMI cables are not exclusivity used for computers; these cables are also often used to connect DVD players, game consoles and other video devices to TVs.

Peripheral devices such as mice, keyboards, external hard drives and digital cameras typically connect to a computer using either Universal Serial Bus (USB) or FireWire cables. USB is a standard interface that is available on almost every modern computer. Many computers have three or more USB ports allowing several USB devices to attach to the computer at the same time. FireWire (also called IEEE 1394) is a data transfer technology created by Apple Computer which is similar to USB and is sometimes used on external hard drives and digital camcorders. FireWire ports are common on Mac computers.

Around The Home
Productivity
By: Eileen Faust

What Is an RF Cable Used For?

Around The Home
Entertainment
By: Gregory Hamel

Around The Home
Entertainment
By: David Hicks

What Is the Difference Between an RGB & a VGA Computer Monitor Port?

Around The Home
Productivity
By: Dora Diamond