Since the beginning of modern computer technology, computers have relied on a "core" that is responsible for the bulk of command execution and interpretation. Known as the CPU, this particular hardware has undergone numerous technological refinements over the past decades but has continually served the same purpose. For many computer enthusiasts, as well as individuals who may be discovering computer technology for the first time, a common question asked is, "What does CPU stand for?" Simply put, the acronym CPU stands for the Central Processing Unit of a computer. 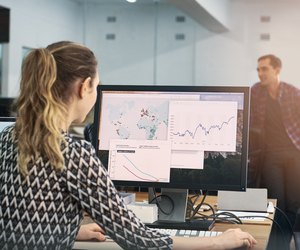 The CPU has been in existence as long the computer itself. Without a CPU or variation thereof, computers would be unable to execute the myriad commands used to run applications and respond to user actions. One of the most fundamental and critical components of the CPU is the arithmetic logic unit (ALU), which is responsible for executing commands and operations on the integer binary number sets that find their way into an astonishing array of modern computing technology, such as graphics processors (GPUs), CPUs and more. Using the ALU, the Floating-Point Unit (FPU), control units and a variety of other resources, a CPU acts as the central overseer and administrator of a computing system. Without the presence of the CPU, a computer could not function.

CPUs integrated into modern computing hardware are surprisingly small, featuring comprehensive integration of all functionality into a single microprocessor. These microprocessors are typically attached to a computer's motherboard, whose purpose is to act as a central "meeting place" of sorts for all the hardware units working collaboratively within a computer system. Compared to the earliest iterations of the CPU in the 1960s, the modern CPU is hardly recognizable. Some of the earliest CPU units involved a transistor-based design, which led to the creation of significantly larger hardware than computers in use now. Although transistor-based CPUs are no longer in use, the current microprocessor design is heavily indebted to the advancements that led to the development of the transistor model and subsequent achievements.

Even though the CPU now exists as a small, unified processor, this vital component of a computing system is still vulnerable, particularly to heat. Given the sheer volume of processes implemented by a CPU, it is common for this hardware to heat up considerably. With that in mind, modern computer manufacturers often install a heat sink and fan close to the CPU to prevent heat damage.