Modern computers rely on a sophisticated series of connections and processes to achieve the outstanding degree of functionality that is considered the industry standard. Typically, consumers divide desktop and laptop computers into two distinct species – Apple and PC machines. Although at first glance the operating systems and hardware design on these two computer formats may appear somewhat different, the inner hardware powering these devices is relatively similar. In fact, Apple's logic board is, for all intents and purposes, virtually identical to the motherboard in a PC. A close examination of a logic board allows you to understand better exactly what actions it executes during operation. 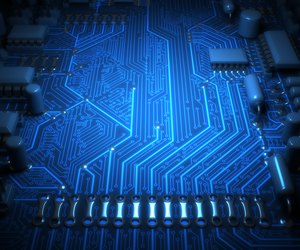 All computers rely on a series of choreographed electrical connections to respond to commands executed by a user and translate them into tangible results. Although individual hardware units such as graphics cards, sound cards, CPUs and memory chips each perform a specific function, the coordination of these actions is the responsibility of the logic board. Each hardware peripheral found inside an Apple computer connects to the logic board. Once these connections are made, the logic board can quickly send information in the form of electricity to the peripherals to ensure that they operate in tandem with the commands of the user.

The Importance of the Logic Board

Although certain elements of a computer, such as a sound card, can be removed without fundamentally impairing general hardware operation, a computer cannot function without an operational logic board, which is also called a motherboard. In an Apple computer, the logic board is undeniably the most critical element of the internal hardware. Given the immense workload placed on this hardware, it is common for logic boards to heat up considerably during use. With that in mind, logic boards typically include an onboard fan that helps to cool the CPU and other critical elements during use.

When a logic board fails, individuals are confronted with a problem – their computers no longer work. Given the cost to obtain a new logic board and replace it, many people feel that purchasing a new computer is a more cost-effective use of their funds. However, if you feel that you have the skill or patience to learn how to replace a logic board, you can buy the parts needed through an online vendor such as eBay. Keep in mind, however, that your computer will be completely useless until a functioning logic board is installed.