What Is the Difference Between a Microcomputer & a Minicomputer?

Microcomputers and minicomputers may sound similar, but they are very different types of computers. Microcomputers usually refer to laptop or desktop PCs that you use in a typical household, whereas minicomputers, which were primarily used from 1960 to 1980, are generally larger, but have limited functionality and slower processors. 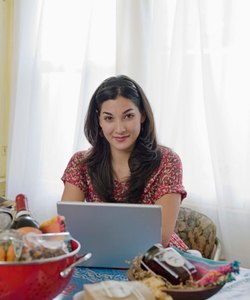 A personal laptop is considered a modern microcomputer.

Minicomputers were developed in the 1960s as midrange computers, which boasted relatively high processing speed, but at a significantly smaller size and price compared to larger mainframe and supercomputers. But don't let the word "small" fool you. Some minicomputers still stood over 6 feet and weighed upward of 700 pounds.

Minicomputers became prevalent in academic institutions, companies and various industries, because of their affordability, size and ease of use.

However, during the 1970s, personal computing was markedly changed by the introduction of microcomputers. This new generation of even lower cost computers replaced bulkier and space-consuming older models of minicomputers by utilizing brand new microchip technology. Each chip contained a microprocessor, which controlled the CPU (also called the central processing unit). The CPU is generally considered the brain of a computer and is where all of the computing power lies in a system. It is made up of interconnected circuits containing thousands, and sometimes up to millions, of transistors.

Minicomputers can be quite bulky. Just the CPU itself can weigh up to 90 pounds.

Minis were designed to be less complex than mainframes but still provide multiple terminals for multiple users. However, many of these systems were still slower, had less memory and were unable to integrate into larger networks.

Like their name suggests, microcomputers contain the functionality of a larger computer, but in a significantly smaller form. Information systems, which once filled an entire room, could now fit in a small silicon chip.

Microcomputers are generally considered the smallest, most affordable and most reliable computers. They can also maintain a very high processing speed, as well as ample internal and external storage capacity. Unlike minicomputers, Microcomputers can connect online, form networks and use various input and output accessories, such as laser printers, and CD-ROM/DVD drives.

Minicomputers were primarily used for process control and performing financial and administrative tasks, such as word processing and accounting. Some machines were designed for medical laboratory and teaching aids.

DEC PDP-8 or Straight-8 minicomputer (1965): Manufactured by the Digital Equipment Corporation, the PDP-8 is considered the most widely known minicomputer. At the time, it was one of the most affordable machines, priced at $18,000.

Intel 4004 (1971): This was the first microprocessor able to read and respond to instructions. The Intel 4004 grouped all the parts of a computer, including CPU, memory and controls on one silicon chip.

What Are the Different Types of Microchips?

Around The Home
Productivity
By: Casey Reader