The Invention of the First Motherboard

At the heart of your computer lies a central nexus that unifies all the other bits and pieces of hardware into a single technological force. It is the motherboard. Every other component in your computer, and all of your ports, plug into the motherboard or are directly integrated into it. This full-scale unification of computing functions developed over time, a process whose beginning marked the dawn of the motherboard itself. 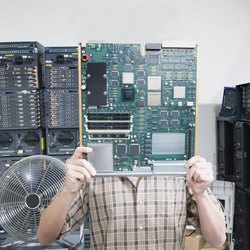 The motherboard, sometimes called "mainboard," has a gradual history. Rather than being invented as a completely new piece of technology, it arose from a simpler kind of circuit board called a backplane. You can think of a backplane as a motherboard with nothing on it. Before the 1980s, computer manufacturers installed each individual component of a computer onto its own circuit board, and plugged these boards into a backplane, which served as the common link tying all the parts together into a working computer.

The IBM Personal Computer featured the first motherboard as we know it, though IBM called it a "planar." It housed the computer's CPU and RAM, provided audio as well as many other functions, supplied ports for keyboard and cassette tape, and had expansion slots for add-on cards, as well as a system called a bus to manage these information flows. Released in 1981, the original PC, with its simplicity and openness, set the standard for many computer hardware specifications in "IBM-compatible" computers — now often simply called "PCs" — for years to come.

From Backplanes to Motherboards

Motherboards retain the function of a backplane by supplying a common circuit board with expansion slots for daughter cards. They go beyond backplanes in that motherboards have, at minimum, onboard central processing, memory, power management, an input/output panel for external devices like the keyboard, and all the electrical pathways necessary for information to flow between the CPU, hard drive, keyboard and everything else. Starting with the IBM PC, manufacturers began integrating these components onto backplanes in the 1980s as technological advances made it economically attractive — as well as appealing from an engineering standpoint — to combine multiple functions onto a single board.

Today, motherboards can easily provide all the computing functions you need to run a computer — including graphics processing, audio processing and network connectivity. Some motherboards omit certain functionality with the expectation that the user will install a dedicated card for it, such as a gamer who wants to use a dedicated graphics card. Either way, today's motherboards have come a long way from their backplane ancestors — evolving from what were essentially empty boards with slots, to self-contained computers where you needn't add a single card.

The Importance of a Motherboard in a Computer

Around The Home
Productivity
By: AdityaR

What Is an Integrated NIC Card?