Headquartered in Taiwan, Foxconn is one of the largest suppliers of electronic components. Using the microATX form factor, the Foxconn G33M02 is the motherboard on some Dell desktop computers. It is most commonly associated with the Inspiron 530 Series, which was released in 2006 and is best known for comprising the first entry of the Inspiron product line. Foxconn manufactured the G33M02 for the Windows 7, Windows Vista and Windows XP operating systems. 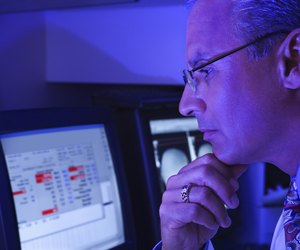 Your computer has many different electronic components.
credit: Jupiterimages/Stockbyte/Getty Images

The socket that houses the central processing unit on the Foxconn G33M02 is called Land Grid Array 775, or Socket T. The LGA 775 socket on this motherboard can accommodate Intel Celeron, Pentium Dual-Core and Core 2 Dual Core processors. Although other members of the G33 motherboard family also support Core 2 Quad processors, this one doesn't. The Intel G33 chip, after which the motherboard is named, is directly connected to the CPU and consequently functions as the northbridge; this leaves the other chip, the Intel ICH9, to handle the motherboard's slower capabilities, thus functioning as the southbridge.

The Foxconn G33M02 comes with four 240-pin DIMM slots for random access memory. Using DDR2 SDRAM technology and operating at a speed of 667 or 800 MHz, each slot can accommodate 1GB of RAM; users can install up to 4GB with this motherboard. For installing mass storage devices like hard drives and optical disc drives, the G33M02 has four Serial ATA connectors. Using second-generation SATA technology, each connector has a native transfer rate of 3 gigabits per second.

Computers with the Foxconn G33M02 have four USB 2.0 ports for connecting peripherals like printers and external data storage devices. A VGA port is for connecting the monitor, and an audio connector is for plugging in headphones or audio cables. Also included is an Ethernet port for wired computer networking at up to 100 megabits per second.

Around The Home
Productivity
By: Fred Flanders

Around The Home
Productivity
By: Andrea Helaine