What Are the Functions of a Circuit Board?

A printed circuit board, or PCB, is found in nearly every type of electronic device. These plastic boards and their embedded components provide the basic technology for everything from computers and mobile phones to smartwatches. The circuit connections on a PCB allow electrical current to be efficiently routed between the miniaturized components on the board, replacing larger devices and bulky wiring. 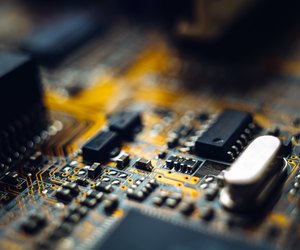 What Are the Functions of a Circuit Board?
credit: Dmitry Dmitry Steshenko / EyeEm/EyeEm/GettyImages

Functions of a Circuit Board

Depending on the application it's designed for, a PC board may perform a variety of tasks related to computing, communications and data transfer. Aside from the tasks it performs, perhaps the most important function of a circuit board is providing a way to integrate the electronics for a device in a compact space. A PCB allows components to be correctly connected to a power source while being safely insulated. Also, circuit boards are less expensive than other options because they can be designed with digital design tools and manufactured in high volume using factory automation.

Composition of a Circuit Board

A modern circuit board is typically made from layers of different materials. The various layers are fused together through a lamination process. The base material in many boards is fiberglass, which provides a rigid core. A copper foil layer on one or both sides of the board comes next. A chemical process is then used to define copper traces that become conductive paths. These traces take the place of messy wire wrapping found in the point-to-point construction method used for earlier electronics assemblies.

A solder mask layer is added to the circuit board to protect and insulate the copper layer. This plastic layer covers both sides of the board and is frequently green. It's followed by a silkscreen layer with letters, numbers and other identifiers that aid in board assembly. A circuit board's components can be attached to the board in a variety of ways, including soldering. Some attachment methods make use of small holes known as vias that are drilled through the circuit board. Their purpose is to allow electricity to flow from one side of the board to the other.

Every circuit is made up of at least four basic elements. The first element is an energy source for either AC or DC power. The second element is a conducting material such as a wire that the energy can move along. This conductive path is known as the track or trace. The third element is the load, which consists of at least one component that drains some of the power to perform a task or operation. The fourth and final element is at least one controller or switch to control the flow of power.

When you insert a load into the closed path of a circuit, the load can use the flow of electrical current to perform an action that requires power. For example, a light emitting diode (LED) component can be made to light up when power flows through the circuit where it's inserted. The load needs to consume energy since a power overload could damage attached components.

The most important components on a circuit board include:

Each of the components on a circuit board performs a specific task or set of tasks that are determined by the overall PCB function. Some of the components such as transistors and capacitors operate directly on electrical currents. They serve as building blocks within more complex components known as integrated circuits.

The term PCBA (an acronym for Printed Circuit Board Assembly) is used to describe a circuit board that is completely populated with components attached to the board and connected to the copper traces. It is also referred to as a plug-in assembly. A board that has copper traces but doesn't have components installed is often referred to as a bare board or a printed circuit board.

The design of modern circuit boards allows them to be mass produced at a lower cost than older wire-wrapped boards. After the design phase of a board has been laid out with the aid of specialized computer software, the manufacturing and assembly are – for the most – automated. A PCBA is considered to be finished and ready for use after quality-assurance testing is complete.

An open circuit is one that isn't closed due to a broken wire or loose connection. An open circuit won't work because it can't conduct electricity. Although voltage may be available in an open circuit, there is no way for it to flow. In some cases, an open circuit is desired. For example, the switch that's used to turn a light on and off opens and closes the circuit that connects the light to its power source.

Another type of faulty circuit is the short circuit, which can occur when too much power moves through a circuit and damages the conducting material or the power supply. A short circuit can be caused by two points in a circuit connecting when they aren't supposed to, like the two terminals of a power supply being connected with no load component between then to drain some of the current. Shorting out a power supply this way can be dangerous and may even result in fire or an explosion.

Evolution of the Circuit Board

Vacuum tubes and electrical relays performed the basic functions of early computers. The introduction of integrated circuits led to a reduction in both the size and cost of electronic components. Soon circuit boards were developed that contained all the wiring of a device that previously occupied an entire room. These early boards were made from a variety of materials, including Masonite, Bakelite and cardboard, and the connectors consisted of brass wires wrapped around posts.

Beginning in the 1940s, circuit boards became more efficient and cheaper to produce when copper wire replaced brass. Early boards with copper wiring were used on military radios, and by the 1950s, they were being used for consumer devices as well. Soon single-sided boards that contained wiring on only one side evolved to the double-sided and multilayer PCBs that are currently in wide use.

From the 1970s through the 1990s, PCB design became more complex. At the same time, both the physical size and the cost of boards continued to shrink. As boards became denser with attached components, computer-aided design applications (CAD) were developed to aid in their creation. Today there are a variety of tools available for digital PCB design, from free and low-cost options to fully functional, high-priced packages that help with design, manufacturing and testing.

Modern electronics couldn't exist without the integrated circuit, which was introduced in the late 1950s. An IC is a miniaturized collection of circuits and components such as transistors, resistors and diodes assembled on a computer chip to perform a specific function. A single IC chip may contain thousands or even millions of components. The most common types of integrated circuits include logic gates, timers, counters and shift registers.

Besides low-level ICs, there are also more complex microprocessor and microcontroller ICs that have the capability of controlling a computer or another device. Other complex integrated circuits include digital sensors such as accelerometers and gyroscopes that are found in mobile phones and other electronic devices. Like other parts of PCBs, the size of integrated circuits has steadily decreased over the past few decades.

Component mounting on early single-sided PCBs used through-hole technology, where a component was attached to one side of the board and fastened through a hole to conductive wire traces on the other side using soldering. At the time it was introduced, through-hole technology was an advancement over point-to-point construction, but holes drilled in the PCB for mounting led to several design issues, especially following the introduction of multilayer boards. Since holes needed to pass through all layers, a large percentage of available real estate on the board was eliminated.

Surface-mount technology (SMT) solved many of the problems caused by through-holes. It became widely used in the 1990s, although it had been introduced several decades earlier. Components were changed to have small pads attached that could be soldered to a circuit board directly instead of through a wire lead. SMT allowed PCB manufacturers to densely package a large number of components on both sides of a PCB. This type of mounting is also easier to manufacture with automation.

SMT mounting did not eliminate the need for holes in circuit boards. Some PCB designs still make use of vias to allow interconnections between components on different layers. However, these holes are not as intrusive as the through-holes used previously for component mounting.

The most complex electronic devices may include multilayer PCBs. These boards consist of at least three layers of a conductive material such as copper alternating with layers of insulation. Common configurations for multilayer boards include four, six, eight or 10 layers. All the layers must be laminated together to ensure that no air is trapped between the layers. This process is usually done under high temperature and pressure.

The benefits of multilayer PCBs include a higher density of components and circuits in a smaller space. They are used for computers, file servers, GPS technology, health care devices, and satellite and aerospace systems. However, multilayer boards also have some disadvantages. They are more intricate and harder to design and manufacture than single- and double-sided boards, which makes them more expensive. They can also be difficult to repair when something goes wrong within the internal layers of the board.

What Are the Lines on a Circuit Board Called?

The Functions of a Breadboard