What Is a FireWire Cable Used For?

FireWire, Apple's name for the IEEE-1394 serial bus standard, is a general purpose interface that predates USB and can be used to connect multiple devices to a computer or to enable high-speed transfers between computers. Often used to connect consumer electronics or to connect peripherals to a computer, the IEEE-1394 standard is also used in Sony's iLink technology. By 2014, Apple replaced FireWire with the Thunderbolt interface on new Mac machines. 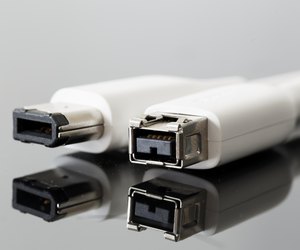 The FireWire standard moves data at 400 Mbps, with the faster IEEE-1394b standard -- FireWire 800 -- moving data at 800 Mbps. An isochronous standard, FireWire streams data in real time and, as a result, is commonly used to connect set-top boxes and other audio equipment. It supports multiple connector types and features a six-pin cable that plugs into the computer and a four-pin cable that connects to the device.

Televisions and set-top boxes often include a FireWire interface, so it can be used to build a home theater system that is plugged in to the Mac. It is also commonly used in connecting consumer electronics, external storage and a wide variety of multimedia devices. FireWire can be used to connect two networks or two computers together by running TCP/IP over FireWire.

Pros and Cons of FireWire

FireWire has many more pros than cons. Though FireWire cable is more expensive than other connectivity methods, it carries several advantages, not the least of which is the speed, which makes it useful in connecting camcorders and other multimedia devices. Another benefit is that the cable transfers power at the same time as it transfers data, which means there are fewer potentially dangerous power points, and it is possible to charge and sync devices at the same time. In addition, since FireWire 800 can operate for up to 100 meters, it can be useful across large rooms or for making connections between rooms.

How to Attach a Mac Mini to a Monitor

What Is a Firewire Card?

Around The Home
Productivity
By: Christopher Capelle

How to Transfer Data From PC to PC Using USB Cable

What Are the Different Types of Computer Cables?