What Is ANSI Format? 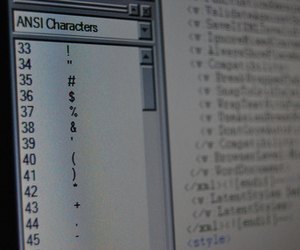 From ASCII to ANSI

The 8-bit ANSI format is just one development in the history of efforts to improve the capability of electrical machines to communicate faster and more reliably. Early computers were little more than "number-crunchers" required to handle only numerical data. As communication devices advanced in complexity--and computers became global--the need arose for computers to be able to represent more than just numbers. The 7-bit ASCII format was the initial response to this need. The 8-bit ANSI format doubled the number of characters of the original ASCII.

The introduction of the 8-bit ANSI format, while a big improvement over ASCII, was fated to become a short-lived cause for celebration as computers became more widely used by people in other countries where English was not the native language. Even with 256 (0 to 255) possible characters, the ANSI 8-bit format was severely lacking in its ability to be applied to computers using disparate sets of characters and control codes. Both standards are however, still useful for Western languages.

The addition of the 8th bit in the ANSI format led various groups and government to start thinking of how to make use of the additional 128 places for characters. Since there was no agreement between these groups on how to use them, the result was that documents sent from one system to another were often unreadable due to the different encoding standards. This situation was addressed by the creation of IBM (OEM) and Microsoft (ANSI) systems which defined code pages consisting of ASCII for the bottom 127 characters and a given language variation for the top 128 characters.

The name ANSI applied to the code pages used by Microsoft operating systems seems to indicate that the American National Standards Institute (ANSI) actually standardized the mappings. This is not the case as ANSI has not officially standardized Microsoft's Windows-1,252 character encoding. The term ANSI is accepted more or less due to Microsoft's legacy in the computer world.

Since the Internet has become essentially ubiquitous with more people using different languages it is no surprise that older character encoding standards have given way to newer, more comprehensive standards. Microsoft's Windows Unicode (UTF-16) provides for over 65,000-character codes. This is tremendously greater than the 256 available with the ANSI 8-bit format and allows for full functionality in almost all languages.

Around The Home
Productivity
By: G.D. Palmer

How to Convert a .PDF to .ASCII

How to Display Japanese Text on an English HTML Page

Around The Home
Productivity
By: Rajeev Singh

How to Type Exponents in a Word Document

Around The Home
Productivity
By: LaDonna Hadley