What Is GHz in a Phone?

Smartphones and cordless phones use gigahertz to measure the clock speed of a smartphone's microprocessor and the broadcast frequency a cordless phone uses to communicate with its base station. A cordless phone differs from a wireless phone in that it connects to a base station that acts as a mediator device with the landline, whereas wireless phones connect to cellular networks. The term "gigahertz" is also assigned to the device's compatible Wi-Fi frequencies. 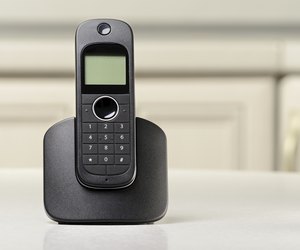 A cordless phone in its charger.
credit: Kuzmik_A/iStock/Getty Images

A single hertz measures one cycle per second and can be used to measure all sorts of repeating events like computer processor clock speeds, monitor refresh rates and electromagnetic wave frequency. The hertz measurement is particularly important in wireless radio communication. Radio broadcasting and computer processors work so fast that the measurements megahertz and gigahertz are used to measure one million and one billion cycles per second respectively.

A cordless phone's gigahertz rating doesn't measure how quickly the device performs; the rating measures the radio broadcast communication frequency between the phone and base station. Modern cordless phones operate in the Federal Communications Commission authorized 900-MHz, 2.4-GHz and 5.8-GHz bands. Lower frequency devices using 900 MHz and 2.4 GHz are better at broadcasting through walls and other physical objects. Higher frequency devices using 5.8 GHz are better at avoiding interference from other electronic devices: Fewer devices operate in the 5.8-GHz band than in the 2.4-GHz band, making the 5.8 GHz less crowded.

When referring to a smartphone, the gigahertz measurement gauges how fast the device's central processing unit operates. A CPU's hertz rating reflects how many binary instructions the chip process in a second, so in most cases, higher is better. However, smartphone CPUs feature multiple cores, which makes it difficult to compare the performance of phones solely on gigahertz rating. The higher the core count, the better. Smartphones require high-performance CPU hardware to handle increasingly demanding apps and programs. Evaluate phones based on both speed and number of cores.

Smartphones and smart cordless phones also use gigahertz to describe the Wi-Fi frequencies that are compatible with the devices. Most Wi-Fi devices operate in the 2.4-GHz band, but some also work in the 5.8-GHz range. Choosing a phone with a 5.8-GHz designation is preferable because it indicates compatibility with both 2.4-GHz and 5.8-GHz routers. Devices with the 2.4-GHz designation work with only 2.4 GHz routers.

How to Calculate BHCA

Around The Home
Productivity
By: Ryan Menezes

How to Enable WiFi on an Android Emulator

How to Turn on a Kyocera Phone