What Is the Difference Between a Mini USB & Micro USB?

Ready to feel old? The USB cable has been on the market over two decades. Of course, the reliable old Universal Serial Bus cable – much like immortal rock icons Prince and David Bowie – owes much of its longevity to its ability to evolve and adapt over the decades. This trait can make understanding the difference between micro and mini USB and beyond a little tricky, but plug yourself into the basics, and you'll be up to date on all things USB in no time. 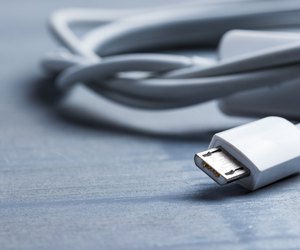 All About Mini USB

The grandparent of all USB cable types, the original USB type-A that you always tried to plug in upside down on the first try, hit the market in the 1990s and is capable of transferring data at speeds of up to 12 megabytes per second. Throughout the 2000s, the physical shapes of the connector and ports didn't change, but the arrival of the USB 2.0 and USB 3.0 standards made for speeds of up to 480 Mbps and 5 gigabytes per second, respectively.

Also in the early 2000s, mini USB hit the scene. This type of cable does change the physical form factor, with an anvil-shaped five-pin connector that is about half the width of USB-A. Mini USB was especially popular for use among smaller devices, particularly cameras and MP3 players. For the most part, mini USB was phased out of production as of 2018.

Under the Microscope: Micro USB

The micro USB connector is the most common type of USB cable available as of 2018. Essentially the successor to mini USB, this type of cable features an even smaller connector. In contrast to mini USB, micro USB connectors and ports are flatter and feature a slight taper. The compact size lends itself to use with smartphones, tablets, game controllers and more devices.

Introduced in 2015, the USB type-C cable boasts much faster data transfer rates and a few other perks. The USB-C form factor is larger than micro USB but smaller than USB type-A. Most importantly, it features a rounded, symmetrical shape, which makes it the first USB cable that is impossible for you to plug in upside down.

Primed to become the USB standard, USB-C is capable of transferring data at rates up to 10 Gbps and can deliver up to 10 volts, five amps and 100 watts of charging power, lending itself to fast-charging features on smart devices.

How to Configure a USB Joystick

Your Kids Will Love Exploring With This Cool Digital Microscope

How to Fix a USB Connector With Bent Pins

Around The Home
Productivity
By: Clayton Kim

How to Test a USB Cable

Around The Home
Productivity
By: Perry Piekarski

The History of USB Flash Drives

Around The Home
Productivity
By: Leo Champion