What Tools Do Computer Programmers Use?

Computer programmers write every aspect of any piece of software that makes a computer run, calculate, record, analyze and output data. Approximately 80 percent of the software design process is performed on paper before the writing of any computer code actually begins. Programmers use tools like design documentation, flow charts and pseudocode to keep the programming process organized. 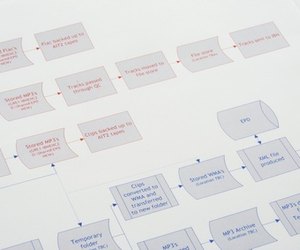 Flowcharts are a useful way to keep programming code organized.

Flow charts are pictured diagrams that illustrate what each and every process does to a piece of data as it is processed through the various components of the new software application. Each chart starts with a small oval and indicates movement throughout the process with directional arrows through the shapes. Each shape has a different meaning. Rectangle boxes indicate a process or an action. Diamonds indicate a decision point and will have either a "yes" or a "no" directional indicator stretching from them. Flow charts end with a small oval. Pages are connected with small circles when applicable. Flow charts visually describe what the process should do and when so that the programmers can write the computer code in the order of the logic specified in the flow charts.

Pseudocode is a technical term for "false code" as it is blocks of lined statements meant to represent actual computer code written in plain English. The lines of pseudocode are modeled after the visual logical patterns in the flow charts. This false code can be as simple as "User presses 'Enter' button. Screen displays 'Hello World!'" to complex such as "User presses 'Enter' button. Calculate sub-routine begins. Screen displays answer in decimal format." After the the pseudocode is written for the software, the computer programmer will "desk check" it by running through it to make sure it functions logically. When there are no theoretical logic errors present and each section of code is accounted for, then the programmer will sit down and write the actual computer code in the programming language as specified by the employer.

How to Build Computer Software

Around The Home
Productivity
By: Warren Rachele

How to Convert Matrix to Vector in MATLAB

Around The Home
Productivity
By: Joe Friedman

How to Write an Analysis & Design Document for a Software

How to Create an IPO Chart

Around The Home
Productivity
By: Kevin Johnston

Around The Home
Productivity
By: David Stewart