These High-Tech Toothbrushes Teach Your Kids to Brush 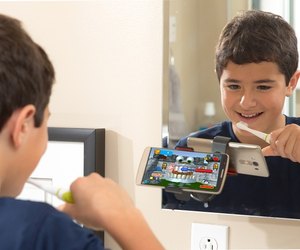 New parents soon learn that kids and dental hygiene don't mix. When they visit their pediatric dentist for help getting their kids to brush, they get another shock. "You have to do it for them," the dentist says. "We do? For how long?" "Seven years." Cue horror music.

Seven years of brushing your kids' teeth--that's the average--is a lot to ask, especially when you sometimes forget to brush your own teeth. No wonder tooth decay is the most common chronic disease affecting children ages 6 to 11.

But in the last few years, a number of high-tech toothbrushes have entered the market to make life easier. Essentially, they turn the toothbrush into a gaming controller linked to a game on a smartphone. The idea is to make your kids feel like they're playing a video game and not stuck doing a tedious chore. Here's a trio of such products.

Although I haven't tested it hands-on, Grush Co-Founder Ethan Daniel Schur makes a compelling case as to why Grush: The Gaming Toothbrush stands apart from its competition: He claims that it's the only smart toothbrush that can accurately detect the brush's location in the mouth, and it offers "tooth-to-tooth navigation" with resolution up to a single tooth. 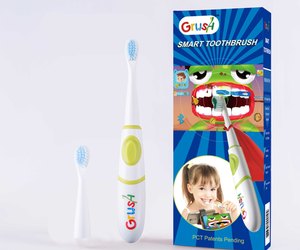 Schur says that other gaming brushes only recognize sections of the mouth. He likens it to playing Pac-Man by quadrants. The company is creating a series of videos pitting Grush against the competitors to demonstrate the difference. Here's Grush vs. Philips Sonicare for Kids.

Grush's first game is called Toothy Castles. It features a castle with a giant toothy grin. As you brush, a virtual brush in the game scrubs the same tooth on the castle's teeth. When you have brushed an individual tooth long enough, coins pop out (you know, like when you brush in real life) and you move on.

Grush plans to incorporate three new mini-games in the future: Monster Chase, Toothy Orchestra, and Brush-a-Pet. In the first, you brush off monsters from a giant pair of choppers. In Toothy Orchestra, you play music by following along as the game points you to different instrument sections--ensuring you brush every section of your teeth. In Brush-a-Pet, you raise and care for a giraffe over the course of a year. The games will appear to adult eyes as rather basic and graphically uninspiring, but for young children that likely won't matter.

After playing, kids get a score, and parents get a real-time report. It's a color-coded image of a set of teeth with a tooth-by-tooth color-coded breakdown. It's easy for parents to interpret at a glance, and dentists can derive "meaningful data" from these reports, which are kept and compiled in the cloud, Schur says.

Grush holds a patent on its tooth-by-tooth navigation and last year its creators won the $1 million grand prize in the first season of America's Greatest Makers, a Shark Tank-like show from producer Mark Burnett. For those curious, here's the season finale.

Grush comes with a sonic toothbrush and three replaceable brush heads. It operates on a AAA battery that should last three months. It costs $60.

If you're on a tight budget, Playbrush might be a great option. It retails for $30 and works as an accessory for any manual toothbrush. Playbrush isn't itself a toothbrush, but a gadget that you insert your toothbrush into and which links via Bluetooth to your smartphone. One Playbrush can serve an entire family of up to six people. Children just put their own toothbrush inside the base and choose their individual profile on the app. 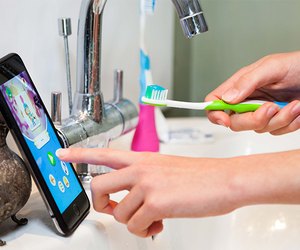 The Playbrush measures speed, duration, and position in order to deliver feedback on your brushing. It includes four games. You can paint a flying tooth, shoot oncoming monsters, or fly through the air (you have to keep brushing to stay aloft). In return, Playbrush makes sure your kids cover all four quadrants of their teeth as they play the games.

Your kids receive a score at the end with some notes about their brushing, like "Brush your outer left better!" As Playbrush can be shared, scoring may promote healthy competition among siblings.

A single Playbrush retails for $30 but you can also buy a pair (one blue, one pink) for $50. The company also sells splash resistant smartphone holders for $7. The Playbrush gadget will work with 95 percent of toothbrushes, but not electronic brushes.

Kolibree is a sonic rechargeable toothbrush that also uses games to promote good dental hygiene. It's certainly an elegant-looking kids' toothbrush--but maybe that's because it's not just for kids. It's also marketed to adults. For grown-ups, there's a more mature coaching app instead of games. Unless you're in touch with your inner child--then you can enjoy the games, too. 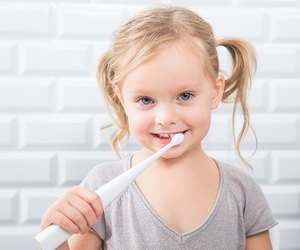 Kolibree provides weekly reports that show you how you're brushing and what areas you need to work on. You can collect badges, points and challenge other family members.

In Kolibree's flagship game, Go Pirate, your kids collect gold coins and island hop in search of Black Beard's treasure. A Smart Guide appears at the bottom of the game representing rows of teeth to tell your kids where to brush. Initially, there are eight zones. As your kids progress that grows to 16 zones. The company's website says the game is designed to last three months (assuming two brushings per day for two minutes each).

Kolibree also released an iOS-only game, Rabbids Smart Brush, designed by game developer Ubisoft. In fact, Kolibree has partnered with Ubisoft to build games for a dedicated children's brush that is expected to release later this year.

In March, Kolibree will also release Ara. The company is touting it as the first toothbrush with embedded artificial intelligence--it works on its own, without connecting to a smartphone. Ara is geared for adults and Kolibree came up with it when it recognized that adults don't want to open an app every time they brush their teeth.

Kolibree's current toothbrush retails for $99. For that you get the brush, recharging base and two brush heads. Replacement packs of three brush heads retail for $19.

The 5 Best Headphones to Get You Through Your Workout

Canes to Gloves: 8 Smart Devices For When We Need Extra Help

Around The Home
Smart Home
By: David Isaac