Advantages and Disadvantages of Microcomputers

Microcomputers, an early word referring to personal computers or home computers, have been a common part of the home and classroom for about twenty years, and as of 2009, almost 70 percent of homes in the United States have a computer. Although this technology has brought great benefits, it can also be a source of problems. 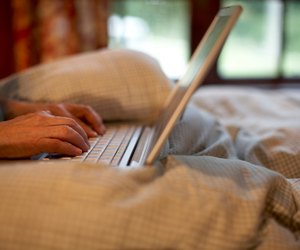 Home computers provide both great opportunities for connection and dangers.

Computers, specifically computers connected to the Internet, allow people access to a wealth of information and sources that were not formerly available to them before the widespread use of personal computers. With increased access to encyclopedias and free full-text books, both students and adult learners are able to expand their knowledge of subjects, and have a larger grasp of knowledge than is possible without a home computer.

Computer usage at home can have some negative physical effects. Studies have found that children who frequently use computers at home generally spend less time in physical activity and are more likely to be obese. In addition, frequent computer usage can also cause eye damage such as Computer Vision Syndrome.

Home computers with Internet access allow for connection to both people who we meet in everyday life (such as family members planning a reunion), and with people who are not in immediate proximity. This increased ability to have a social circle is useful for people who live in physically isolated places, or who suffer from illnesses like social anxiety that might keep them from feeling comfortable in a group.

Another problem due to microcomputers is the issue of computer addiction. Having computer access within the home can lead to various computer addictions, such as Internet addiction, game addiction or even cybergambling. While addictive activities such as games and gambling are possible without computers, the presence of a computer inside the home makes giving in to these addictions much easier.

Main Reasons You Use Computers

Around The Home
Productivity
By: Marcus Baker

Around The Home
Productivity
By: Lee Morgan

The Advantages of Home Internet

Around The Home
Productivity
By: Patricia Hill

Around The Home
Productivity
By: Paul Cartmell