Uses & Misuses of the Computer

Computers are a central part of everyday life. People use them to keep records, purchase items, balance checkbooks, and find entertainment. Computers make lives easier with their ability to find information quickly. Communications for personal and business uses are faster and more efficient than ever before, and with all the positive aspects of computer use come the negatives. Misuse of computer technology is a deviant activity with possible legal ramifications for the perpetrators. 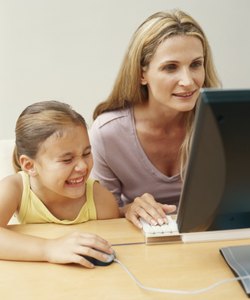 Parents are a strong influence on their children's proper computer usage.

Career networking websites allow professionals to post profiles describing their work experience and current position. Using career networking sites encourages communication between professionals within the same and related industries. Human resource departments use these sites to recruit new employees. Social networking sites are geared toward a person's social life. These sites make it easy to stay in touch with friends and family that move away. Users can post pictures, videos and some sites even allow blogging. Many people use popular social networking sites like Facebook to promote their own business.

Computers are vehicles for many forms of entertainment. The Internet features movies, video games and music and all are available for downloading. In the absence of the Internet, games can be purchased at retail stores and installed on the computer. Movies can be viewed from a computer that has the proper software and online gaming sites allow users to play with other members globally. Some websites allow members to upload videos of funny situations and events.

White-collar crimes can involve the misuse of computers. Economic white-collar crimes include embezzlement, fraud, racketeering, and money laundering. White-collar crime has risen with the ease of conducting fraudulent business transactions at the great distances computers provide. Other computer misusers, called hackers, create and spread viruses via the Internet that crash systems and steal personal information. Bank account and credit histories are then compromised with the use of this information.

Cyberbullying is the act by a minor of directing verbal assaults and/or death threats towards another minor. Cyberbullying-by-proxy is the act of a minor aiding another with the bullying of a target. Cyberbullying has legal ramifications, and depending on the child's age, they will be charged with a misdemeanor or an act of juvenile delinquency. More serious state and federal charges will result if their actions include hacking or stealing personal information. Schools have recently implemented programs to teach students of the effects and dangers of cyberbullying.

The Effects of Internet Addiction

Around The Home
Productivity
By: Simon Breedon

The Advantages & Disadvantages of Personal Computers How to Block Sex Sites

Around The Home
Productivity
By: Amy Lukavics