Microsoft Internet Explorer, Google Chrome and Mozilla Firefox are in a three-way race for Web browser market share among Windows users. Choosing the best Web browser is a matter of personal preference and use-case; the main three contenders all have certain advantages and disadvantages over each other. All three provide strong browsing experiences; the pros and cons of each browser come from the bells and whistles or lack thereof. 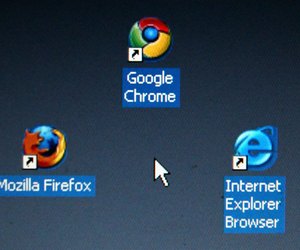 Every Windows 8 computer comes with Internet Explorer already installed, giving the browser an advantage from the start because the user doesn't have to do anything to install it . Generally speaking, IE11 for Windows 8 is a substantial improvement over prior versions. According to Tech Radar, IE loads and renders page content faster than every other browser. Additionally, IE supports a well-designed touch-screen interface. However, IE is haunted by its past, with users running older operating systems unable to update to the most recent version. IE may encounter more page errors than the other browsers because developers don't use it; fewer than nine percent of Web design resources site W3Schools visitors use IE. Prior to IE11, Chrome and Firefox had significantly better developer tools, making the browsers much easier to design for and debug.

Google Chrome offers fast performance and is easy on computer hardware; additionally, it has excellent HTML5 support and is compatible with a large extensions library. What's more, you don't need to install Flash separately for Chrome, as it comes installed with the browser. However, the common user will likely never need to directly work with many of Chrome's best features, its excellent developer tools. PC Magazine lists the difficulty of accessing the "Do Not Track" feature, minor site incompatibilities, and occasional jagged fonts among Chrome's disadvantages.

Mozilla Firefox is the browser that ended IE's era of dominance. Firefox is considered easy to use with its minimalist interface and has a large add-ons library for expanded functionality. While Firefox performs well when loading pages, it uses more memory than the other browsers and is more likely to lack in performance on weaker hardware. Firefox also features excellent developer tools, which makes designing pages to work in the browser an easier job.

Opera and Safari: Alternatives to the Big Three

Opera is an alternative Web browser that is known for being the first browser to include built-in search and tabbed browsing. However, the browser has not been able to develop a large market share. Opera features a minimalist design and works well over slower connections. Apple's Safari browser was a competitor in the Windows browser battle, but Apple dropped Safari support on Windows computers in late 2013. Running Safari on Windows is a security risk because bugs and holes won't be patched. However, Safari remains the default browser for Mac computers and iOS devices.

How to Make Safari Pages Larger on an Apple

Around The Home
Productivity
By: K.C. Winslow

How to Enable JavaScript in Windows 7