Intel introduced the first microprocessor in 1971 and called it the 4004 chip. Today's microprocessors, with dimensions smaller than a dime, offer more power and capabilities. The center of the computer, the central processing unit (CPU) consists of one or more microprocessors. Manufactured from a silicone chip that contains millions of transistors, microprocessors move data from one memory address to another location. The CPUs make decisions and then move on to work on new instructions and calculations. 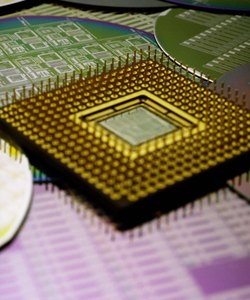 Microprocessors perform millions of commands and calculations per second.

The "arithmetic and logic unit" (ALU) performs math computations, such as subtraction, addition, division and Boolean functions. Boolean functions are a type of logic used for circuit designs. The ALU also executes comparisons and logic testing. The processor transmits signals to the ALU, which interprets the instructions and performs the calculations.

Microprocessors have temporary data holding places called registers. These memory areas maintain data, such as computer instructions, storage addresses, characters and other data. Some computer instructions may require the use of certain registers as part of a command. Each register has a specific function, such as instruction register, program counter, accumulator and memory address register. For example, a program register holds the address of instructions taken from random access memory.

For example, the decoder receives commands from an application. The decoder interprets the instructions and takes an action. It sends signals to the ALU or directs registers to perform specific tasks. The control logic unit transmits signals to different sections of the microprocessor and registers, which informs these components to execute actions. The clock sends signals that synchronize and ensure timely execution of commands and processes.

Microprocessors have a system of buses, which move data. Buses refer to classifications of wiring that have specific tasks and functions. The data bus transfers data between the central processing unit and random access memory (RAM) -- the computer's primary memory. The control bus sends information necessary to coordinate and control multiple tasks. The address bus transmits the address between the CPU and the RAM for data being processed.

Some advanced microprocessors have memory caches, which retain the last data used by the CPU. Memory caches speed up the computing process, because the CPU does not have to go to the slower RAM to retrieve data. Many computers have level 1 or level 2 caches; some systems have level 3 caches. The cache level indicates the order in which the CPU checks for data, starting with level 1. Manufacturers often integrate level 2 and level 3 caches into the microprocessor, which enhances processing speed.

Around The Home
Productivity
By: Phil Lamass

What Are Three Types of Buses on a Motherboard?