Two-way radios, also known as walkie-talkies, remain popular even after the advent of cell phones. Police and security forces, the armed forces, event managers, hunters and many others use them. Two-way radios are extremely difficult to trace. 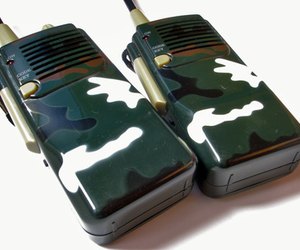 2 way radios are difficult to trace.

If the radio transmits long enough, a highly directional and portable antenna can be used. This type of antenna only picks up signals when pointing almost straight at the target. By slowly turning the antenna 360 degrees, the transmission direction can be found. Move in the direction of the signal and eventually the transmitter will be found.

A minimum of three stations with the same frequency and directional antenna systems are needed. By orienting their antennas to receive the maximum signal strength from the transmitter, the location of the radio can be narrowed down significantly. This requires some coordination between the three stations.

Unlike cellular phones, two-way radios cannot be traced through the ping method.

Around The Home
Productivity
By: Johan Hjelm

How Do I Get a FM Signal in a Steel Building?

Around The Home
Entertainment
By: Erik Johnson

How to Fool a Vehicle's GPS Tracking